A Pair of Anita Ponti Pants 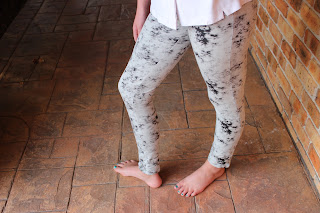 I really hoped the title of this post would be "A Pair of Pair of Anita Ponti Pants", because I have indeed made two pairs of these pants in the last week. This is the first pair, modelled by my daughter Amelia (she agreed to model the pants on the proviso her face was not involved. I'll work on her). These Ponti pants are not made in Ponti, but  a firm cotton knit I found at the Remnant Warehouse.
This pattern went together very easily, as you would guess from a pair of stretch knit pants, with minimum fitting requirements. From go to whoa, 2 hours tops. Great, so on to the next pair I thought.
I cut out the rather nice choc brown Ponti I got from Tessuti. This is the first time I've worked with Ponti. After basting them together to check the fit, I ran them through the overlocker to sew the outside seam....and the seam rippled. But rather than unpick do it again, I was in denial and I did the other one. Yep, shock, horror, case of rippling there too. Rather than endure the agony of unpicking a knit (the downside of knits being so quick to sew) I thought that stitching down the seam allowance toward the back close to the seam would solve that problem, along with a bit of a press. Mmm, not really. And by now, of course, unpicking that lot was nigh on impossible.
Only at this stage did I consult the overlocker manual to find out how to solve this problem, that I have never encountered. Yes, to those of you shouting at your computer "fix the differential feed!!!" that is exactly what I did. And the inner seams and crotch seam look fine. I finished the pants. They fit well, and are super comfy,  but those ripply seams mean that I probably will only wear them within the confines of my home. Which is a sadness really. I'll definitely see if I can buy some more Ponti and have another crack, chastened, and definitely wiser in the intricacies of differential feed. I have some orange ponti, but don't think it would be wise to wear this colour in my lower regions.
Meanwhile, I've been loving the Great British Sewing Bee. I'm forcing my daughter to watch it with me (heh, heh!), in the hope that seeing some lovely young things like Tilly and Lauren making clothes clothes will get her enthused to do some sewing for herself. Unfortunately, to date she has shown no interest in my hobby AT ALL (maybe because it's my hobby?), and her encounter with sewing at school has left her nonplussed. Here's hoping, though, some little seed will be sewn in her mind.
Made by Me pants Tessuti thoughts on sewing