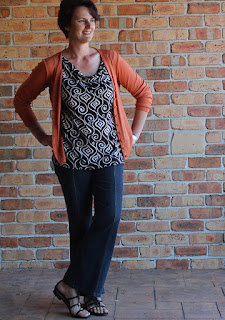 May 4
The first round of my daughter's netball season, and I'm off to be a netball mum. For the first time in a few years, I am not performing any umpiring and/or coaching duties, so I look forward to  sharing my free, informed advice from the sidelines with all and sundry ;)

Daughter's team lost, but she won Player of the Week. Plus, she scored her first goals  in her first ever appearance in the Goal Shooter position (she has only ever played defence until now). See, my netball advice takes you places! 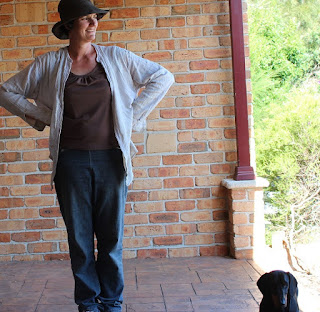 May 5
Talk about truth in blogging!
The weather has been magnificent today - mild, sunny and windless. Perfect day to get stuck into some overdue garden tasks: weeding, pruning, pulling out spent vegies, cleaning out chicken coops. Yep, the glamour doesn't stop here.

Wearing:
Top - Simplicity 4076. Pre-blog make, in fact one of the first things I ever made.
Pants and shirts: who cares, really?

Trust me, I didn't walk out the front gate in this superannuated get-up. Just chose to share it on the interweb with you!

With guest appearance by our dachshund, Dash.
burda Me Made May Simplicity