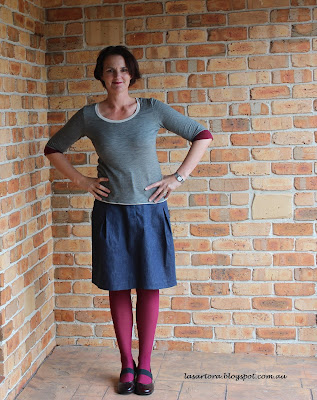 Me Made May brought home to me that my beloved Burda 1-2009 denim skirt had seen better days. It was time to replace, because one of the unwritten rules of my wardrobe is that it must always contain at least one denim skirt.

My neighbour brought me back a German issue of Ottobre magazine in 2010 from a trip she made to Frankfurt, and I've been wanting to make the Bonnie skirt ever since. It has jean skirt styling, apart inverted box pleats in back and front which gives it width around the hemline, hence walking ease. It looked just the ticket to me.

My issue of Ottobre is in German. I have virtually NO German, except for useful words like schnitzel, bier and strudel (guess what I ate almost exclusively during a week in Austria many years ago?) , and that fantastic word schadenfreude. So I ditched the instructions and used construction order for a pair of basic pants.

And now, dear readers, for the first time ever on La Sartora, some construction shots.. 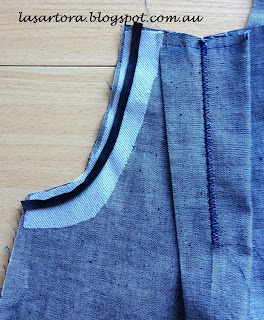 First, reinforcing the pocket opening. I apply interfacing to yoke pocket edges, and then sew twill tape on the seam line so it won't stretch out. 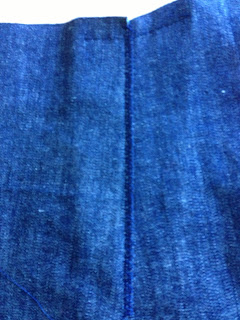 On this skirt I topstitched seams, the box pleat stitching, the pocket openings and the belt loops with double zig zag stitch. I set the zig zag to its widest width, and on the second pass, I slightly adjusted the stitch length so that the zig zag was offset.

The advantage of using this topstitch on  seams is that you can cut away most of the seam allowance, and you don't have to fuss with seam finishes. It cuts out a lot of bulk, which is an advantage on denim.

My doh!  moment (and every project seems to have at least one) came with the fly front zip . I've done many of these now, but I still have to consult instructions every time. I really felt for the contestants on the Great British Sewing Bee who had to do a fly front zip, sans instructions, many for the first time. But I digress.

The fly front zip itself went in fine. The problem came after I'd topstitched the fly overlap facing. You see, what I do to guide my sewing here is use freezer paper as a stitching template. You lightly adhere the paper over the overlap and then stitch around it, like so... 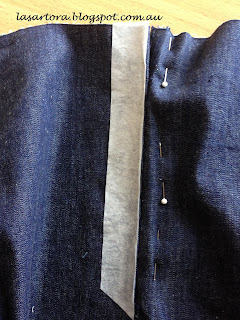 Then you peel away the template, and there you have it! Except that this time, my template seemed to leave a lot of glue residue behind which has never been a problem before. I've gradually been picking away at it, with the help of Murlex baths, and it is gradually coming off, but not as fast as I want it to. It's hard to pick up in the picture but believe me, it's there.

And now for the final shot, Sewist with Dachshund... 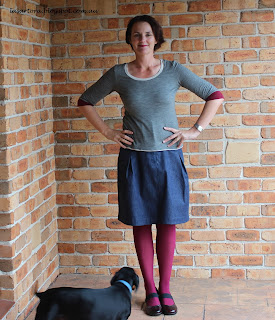 Made by Me Ottobre skirt