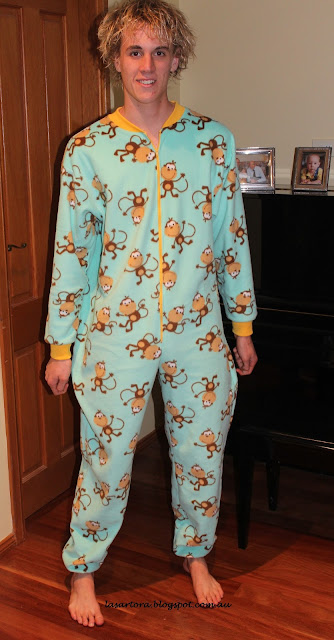 So we go from the ridiculous in the previous post to the ludicrous. Introducing my 6'1" 15 year old son in his Mum-Made onesie, the first item of clothing I have made for him since he was about 18 months old. And apart from the dimensions, not all that different.
He chose the fabric. Unlike his sister, he didn't have a problem with animal prints. If was ready for him in time to take to his friend's place when he stayed there the other night. 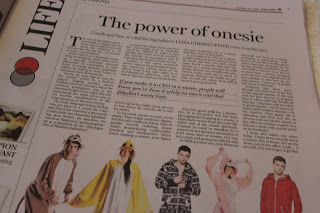 In yesterday's Sydney Morning Herald,  this article about onesie-mania appeared (I'd link to it, but the SMH now has a paywall). In the writer's opinion, "onesies scream social equity. They might eradicate dignity, but they also eradicate status. They're gender neutral (Quite. I used  a "Misses" pattern to make my son's onesie. I won't tell him if you don't), comfortable, practical and inexpensive."
Mmm. Maybe.
To me, they're is something a bit squirmy about adults, even young ones like my kids, wearing clothing that normally belongs to toddlers. Still, I can't argue that they weren't appreciated. They immediately became standard wear around the house during these winter evenings. And the kudos they have received from their onesie-loving friends...well, that's what it's all about, isn't it?
But that's enough silly sewing for a while. Back to sensible sewing on La Sartora soon.
﻿
Kwik-Sew Made by Me onesie