August 30, 2013
Gads, it's been a  frustrating few weeks in the sewing room around here. It's been productive, but unproductive, if you know what I mean. I have two competing events demanding my sewing attention - an upcoming high school reunion, and a trip at the end of September to Vietnam and Cambodia. And I've been lost in muslins trying to get myself organised.
First, I thought I'd muslin the Colette Laurel pattern, with the idea of cooking up some kind of colour blocked version for the reunion, using the fabric left over from my two Peonies. So I muslined it. I don't know if it was because I muslined it in Spotlight Trace and Toile (I'm thinking it's their version of Swedish Tracing Paper, maybe) or because I added a good six inches to the length to bring it to my knee, but as soon as I put on the muslin, I realised I had arrived in frumpytown. The trace and toile does not drape at all so it added width, width, width. The high neckline did not look good. And I was having second thoughts about red-and-black.Was I carrying the 1980s motif too far?
So I tossed that muslin aside. Will I ever return to the Colette Laurel? Probably not. I have a feeling it's appeal lies in it's shortness, and it's shortness is not for me.
Then I thought I'd turn a length of green sateen from the last post into Burda 02-2009-115 jacket. 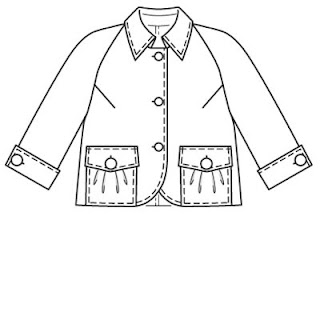 I've liked this jacket ever since I saw it, and thought it was high time I actually made it. So I muslined it, and perfected it. Then I thought I'd check Pattern Review, to see if there were any words of wisdom for me before I got stuck in. Not really, but I noticed that just about all the jackets were made of linen. Again, I had second thoughts about my fabric choice. A rather thin cotton sateen wouldn't make the grade, I decided.So I put those pattern pieces aside, and will definitely return to them, once I've identified the right linen.

Sigh.
Meanwhile, I decided to press on with the colour block idea, and having identified Vogue 8805 as the pattern most likely, all of a sudden I had a severe case of muslin ennui. "what? another muslin?"my sewing muse complained. I needed something, quick and low-risk, to get me motivated again.
So I cut and sewed from start to finish Tessuti's Mandy Boat Neck Tee. What can I say? It's quick. Two hours, tops, including taping all the pattern pieces together. It comes in one size, so I felt free not to bother with any measurements at all. I just cut and sewed it, that's it and that's all. Here's what it looks like: 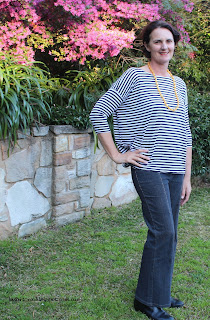 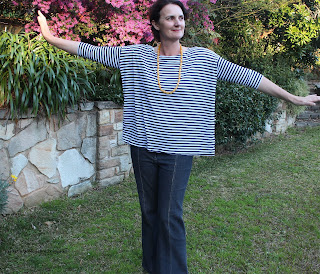 The pattern went together very easily. As you can see the body pieces have plenty of room. The sleeves are a teensy bit firm for my liking ordinarily, but nothing I'd cry over my seam ripper for.  The only challenge was the B*()(@# of a fabric. The stripes are woven from different fibres - I'm thinking the white is cotton, and the black is polyester. Did it want to be pressed nicely on the hems, and neckline?  No way, Jose. If it wasn't for this dastardly fabric, it would have been done MUCH more quickly.
Another notable aspect of this project was that it was the first time I broke out my walking foot. A few months ago I mused on the blog about whether I should buy one. The consensus was yes, but the cost put me off. In the end, my mum financed my walking foot for my last birthday present. And yes, it worked a treat here, and the stripes lined up perfectly. It's not often I get to apply the word perfectly to my sewing, but this is definitely the case here. Sorry, no picture. You'll have to take my word for it.
So, the result? I quite like!
Oh, and the Mandy Boat Neck Tee download is free, free, free! If you have a spare 1.1metre of knit fabric lying around, and a spare couple of hours (especially if your sewing soul needs something quick and comparatively mindless!) do try it!
Back to muslin salt-mines for me. See you on the flip-side.
Made by Me Tessuti tops