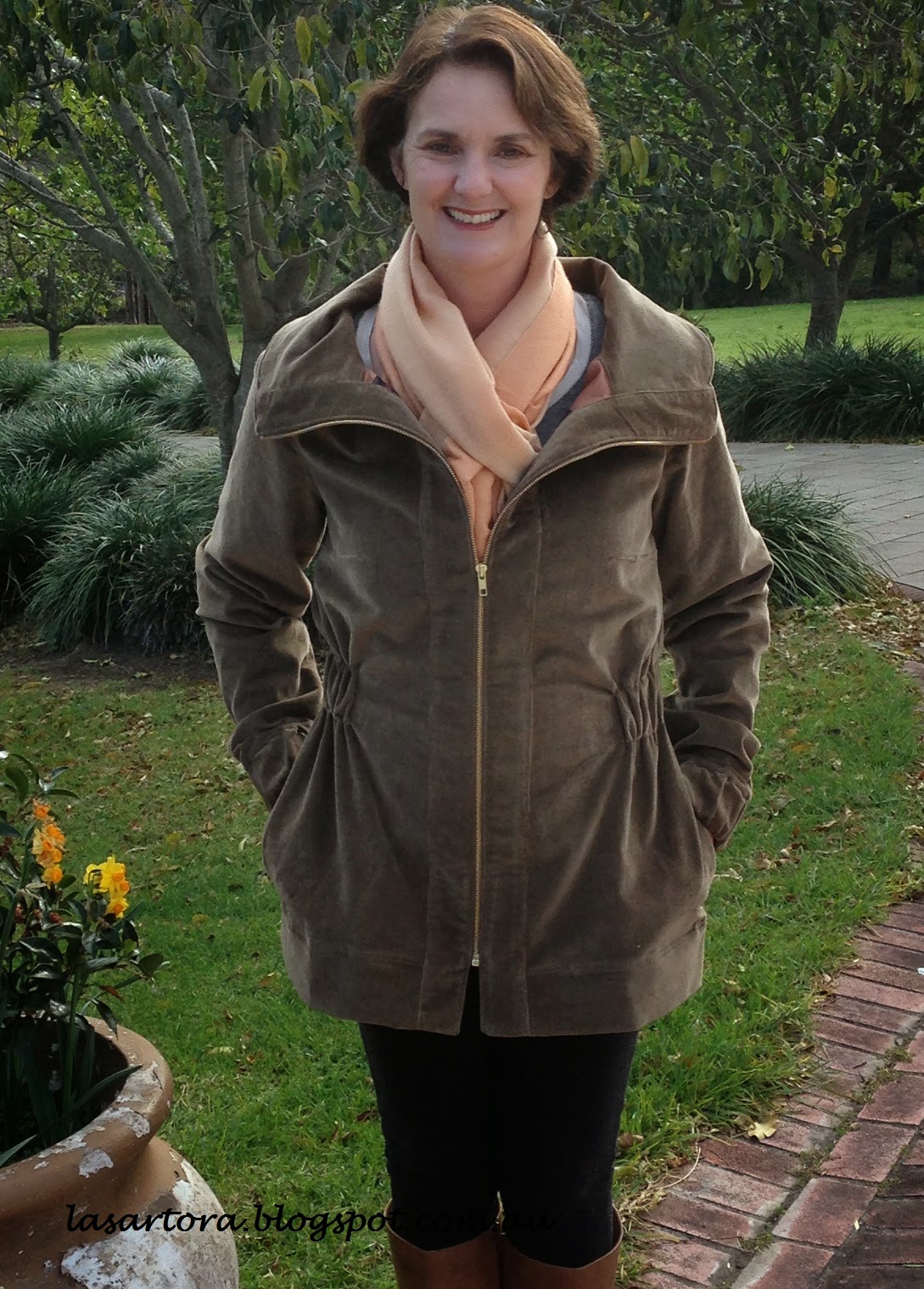 Like thousands of others since 2012, I made a Sewaholic Minoru jacket. More importantly, for the first time, I made a lined jacket. I did it! Go me. 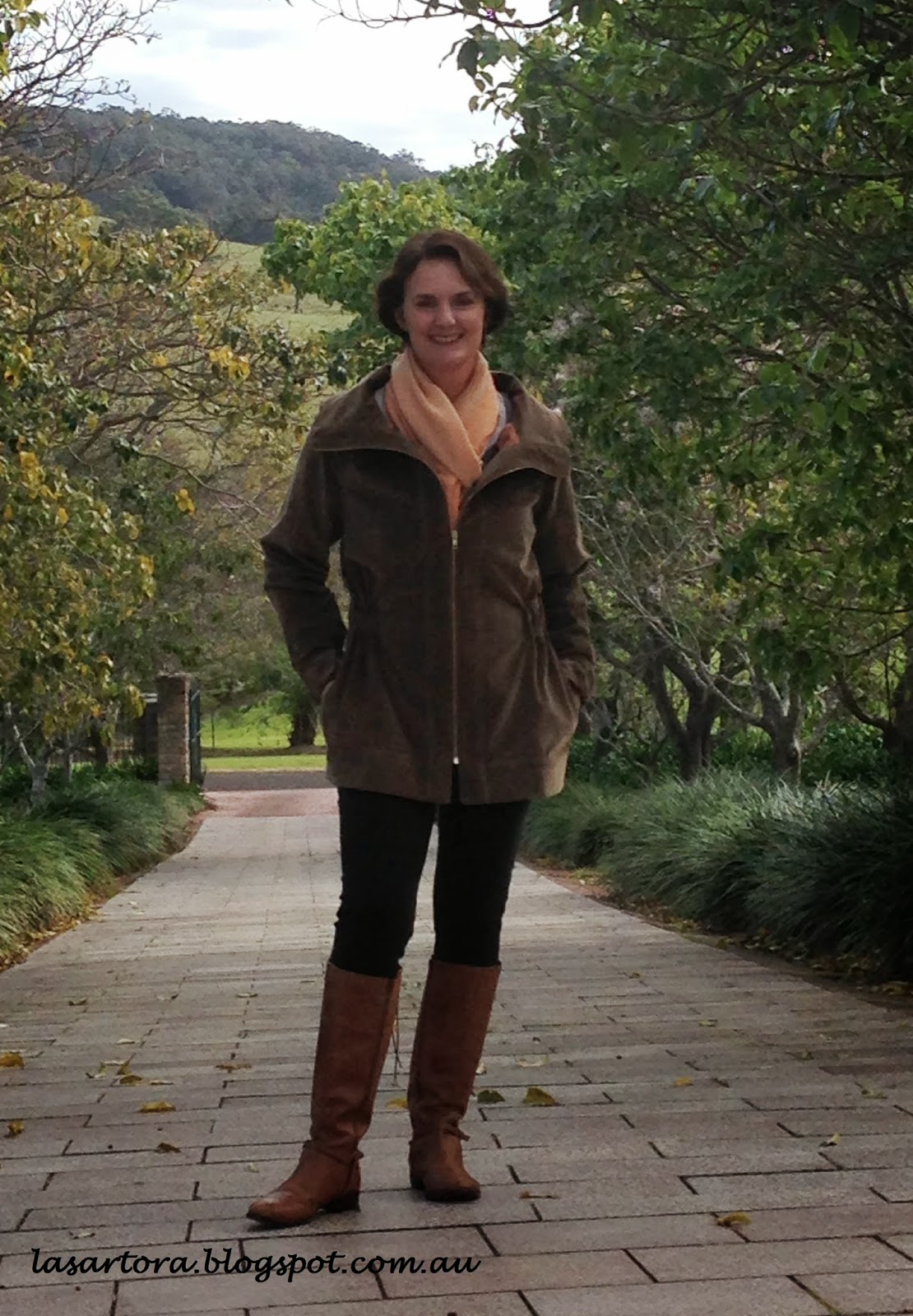 The Minoru has been a very popular pattern since its release. A scan of reviews on-line show that there are no major issues in the draft of the pattern, and there is good feedback overall.  So although I had never attempted a lined jacket before, I felt I was on solid ground giving this pattern a crack.

First of all, the fabric: a good-quality baby wale stretch corduroy I bought at Paron Fabrics in New York in 2012. The cord is lovely, just the sort of fabric I like to wear and feel in winter. I wish I could have bought more. 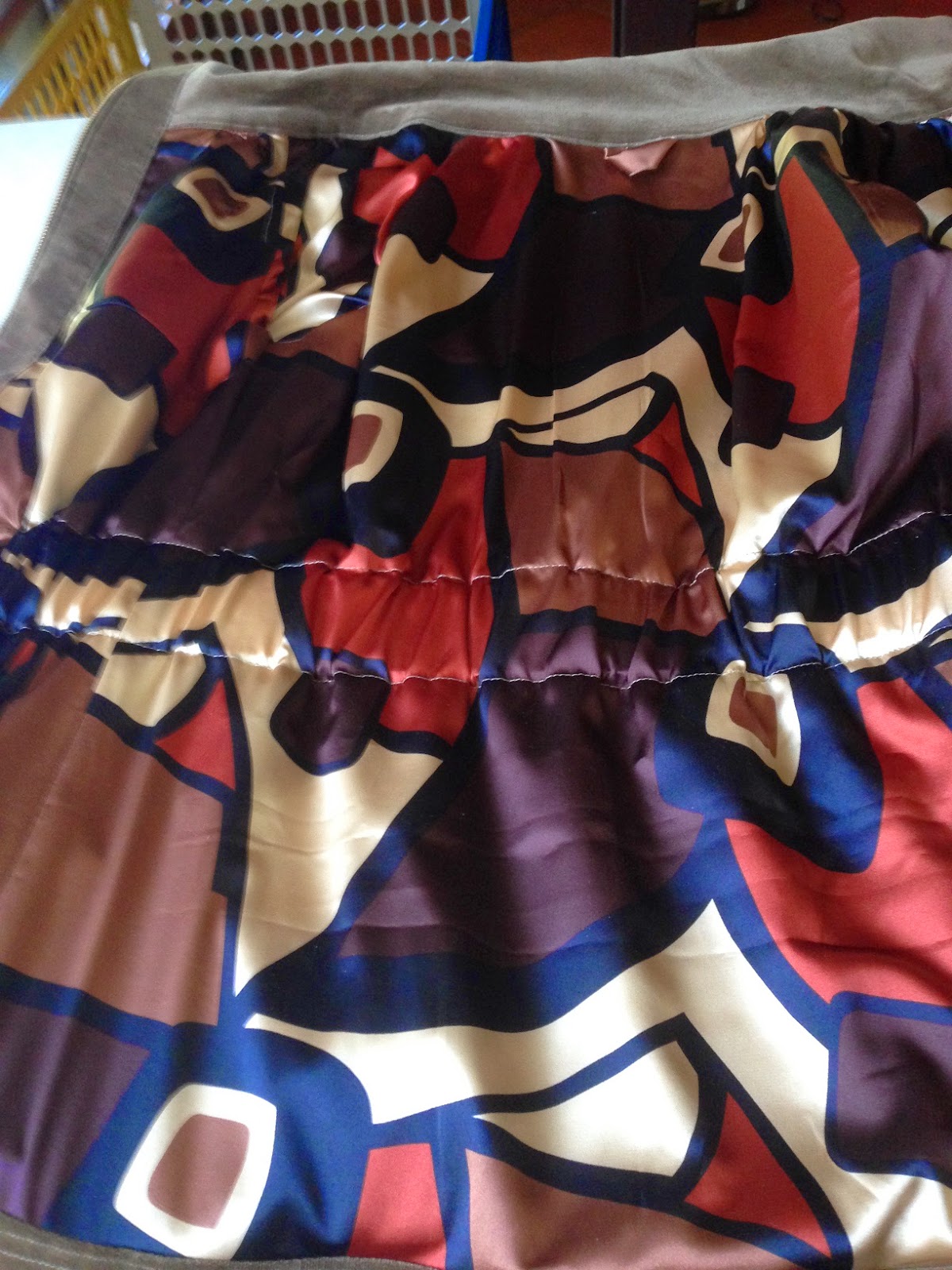 The lining is some sort of stretch something I bought in Cabramatta in my very early days of sewing. I bought it, then looked at that print, and thought “what in heck will I make out of that?”. Well, it took a while but here it is. The zip is also from New York, ordered on-line from Zipperstop to be precise. Thanks again to Sharon for helping me sort the right colour to order. The zipper blends perfectly. 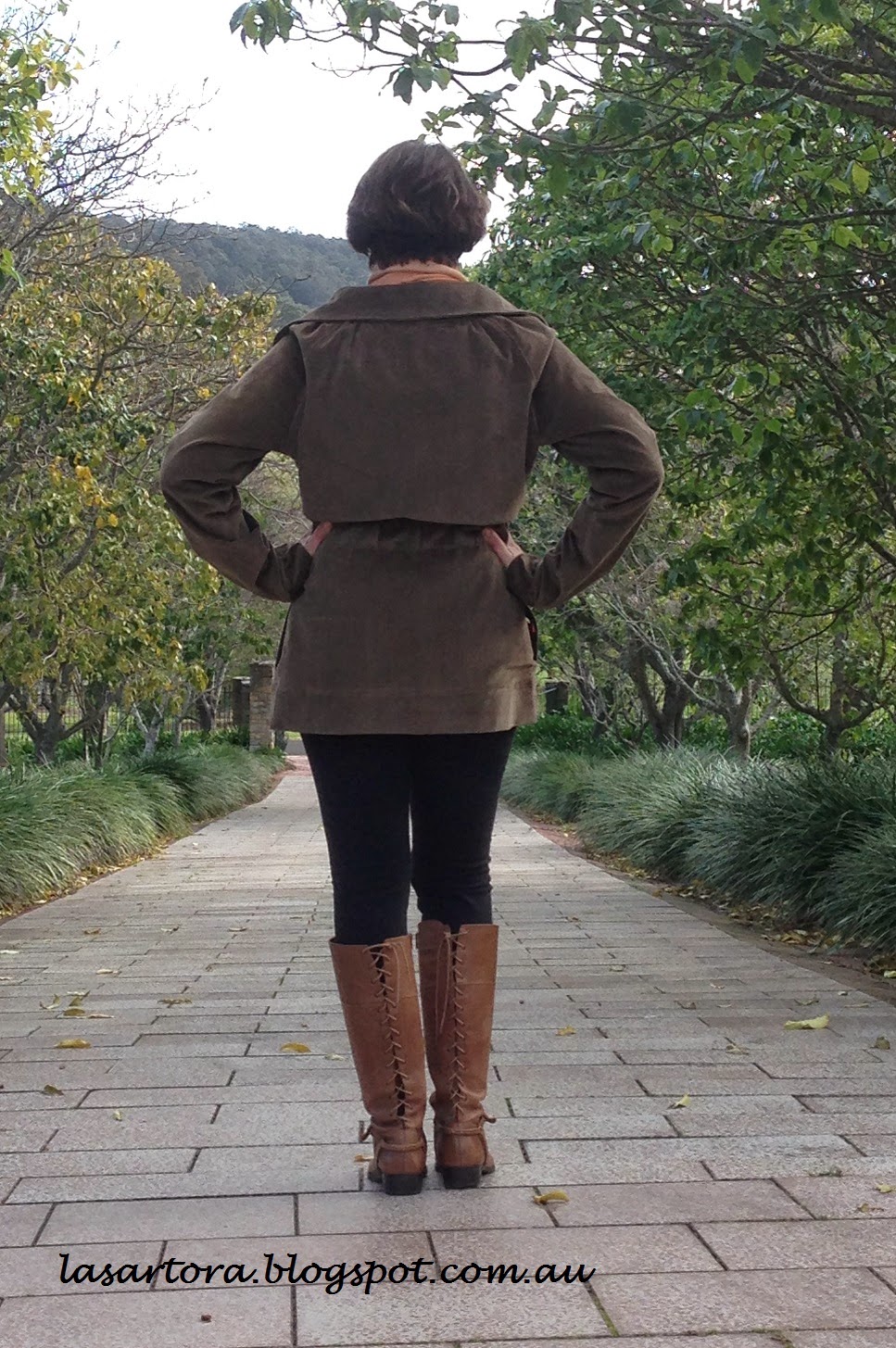 I made a muslin. Initially I cut a 12 for bust and waist, grading down to a 10 hip. Sewaholic drafts for pear shapes, which I am not( although I used to be, back in pre-baby days). I always feel a bit odd grading down, as I normally have to grade up for my hips. It always works though.
For the muslin, I added my customary length of 5cm on all the main pieces. Trying it on, I found I definitely needed an FBA (why do I persist in thinking I can ever get away with not doing one? I almost always need it), and also needed to do a full bicep adjustment on the sleeve.  But I felt that even doing this wouldn’t give me enough room to layer multiple tops, so I went for the belt and braces approach, and cut a size 14 bust and waist, grading down to a 10 hip. Then I did both the adjustments I needed. Yep, it’s plenty big enough now. Maybe a little too big. But I can live with the extra room.
The FBA gave me a dart, which I kept. I coulda, shoulda rotated that dart into the gathers at the collar seam. Oh well, the dart doesn’t worry me unduly. Next time I’ll change it round.
I added inseam pockets, because, I really, really need pockets in a jacket on the outside, and couldn’t see myself using the inside pocket that the Minoru is designed with. Figuring out where to place them was a bit of hit and miss. They are probably a bit too low, but again, I can live with that.
The pattern guide sheet is good, but I cross referenced to the sewalong on the Sewaholic website throughout. The visuals on the website are invaluable. It was a pretty straightforward sew overall.
The only difficulty I found was me-made. I cut the plackets extra long. I added the extra length I had added to the fronts, then cut longer again because I have form in not cutting plackets long enough. I figure that I’m better off cutting long, then trimming. Which is fine, except in this make I found myself getting very confused. The plackets on the Minoru are meant to be shorter than the fronts. Mine happened to be exactly the same length as the fronts, after I added my "just in case"length. This fact is not immediately obvious on the guide sheet, or the website. It took an evening of sifting through all the comments on the website to find someone who had the same problem, and also find the answer that the plackets are meant to be shorter. Once I figured that out, it was plain sailing.
Deciding where to put the elastic waist took at bit of trial and error. I thread traced the casing 5cm lower than drafted, but felt it landed too low. I brought it back up 2cm which was much better. I also brought it in 5cm closer to centre front. 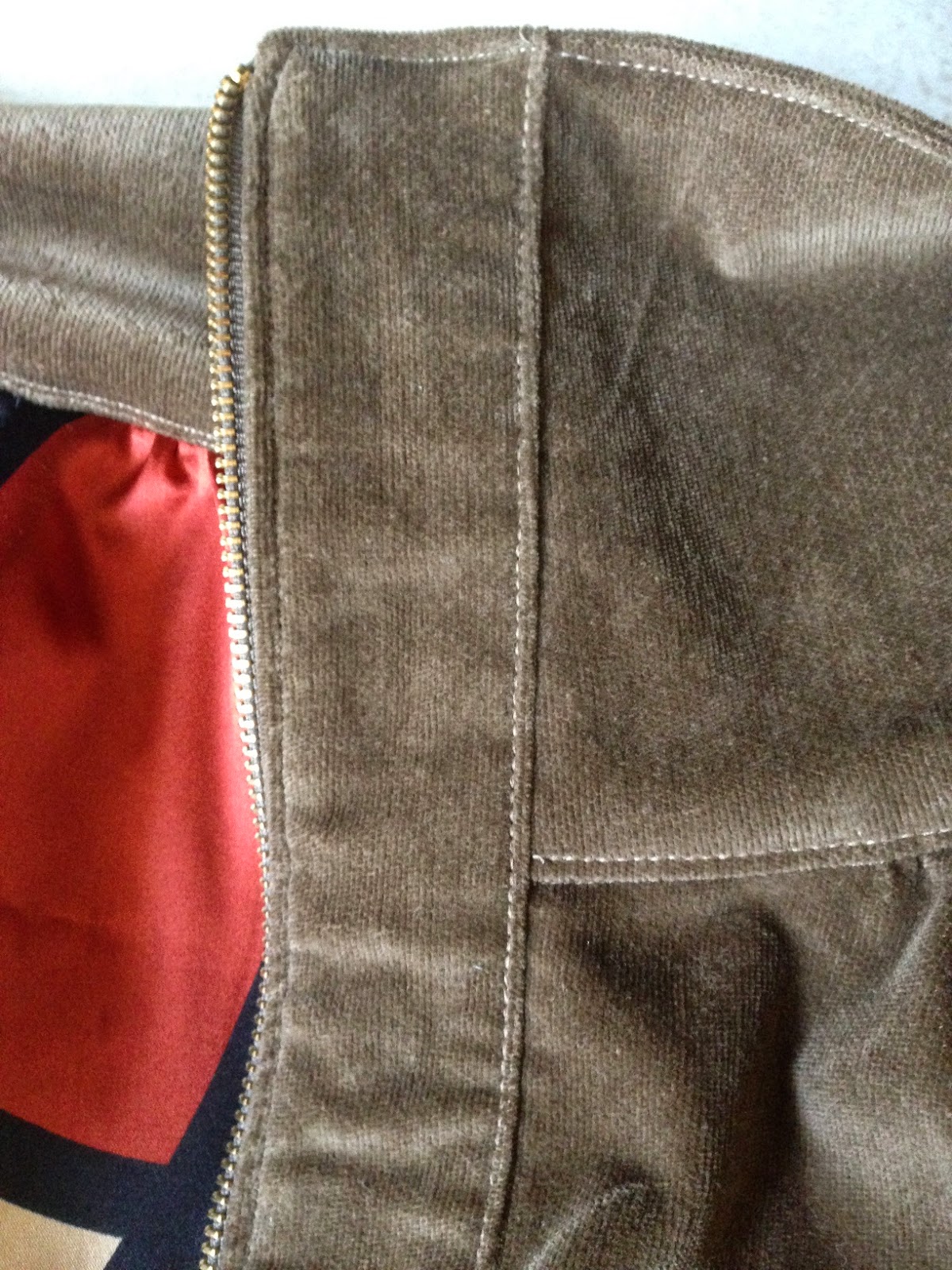 The topstitch was done with two threads through one size 90 needle. Worked well. And the zip looks good. 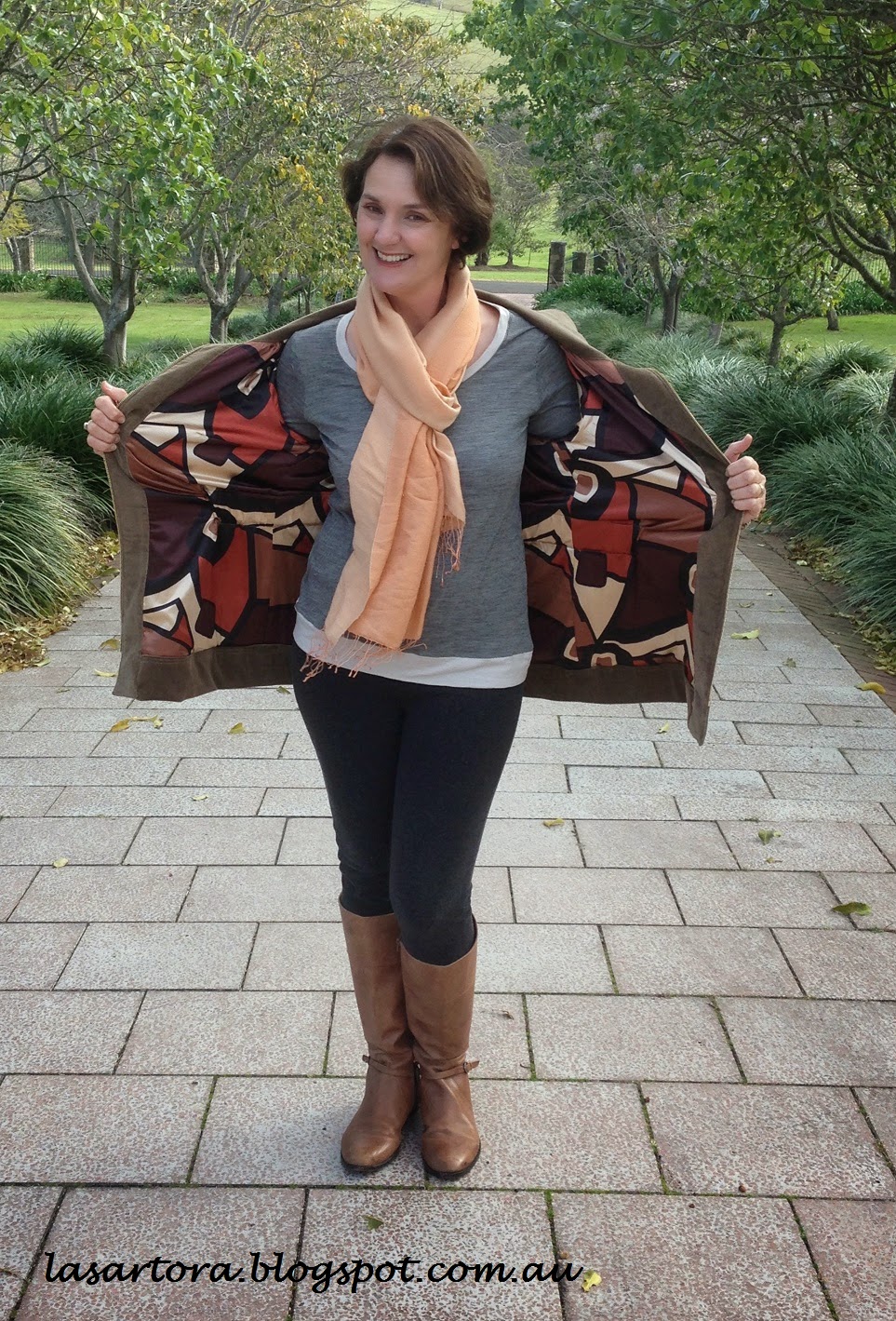 I like the juxtaposition of the corduroy which gives off a country casual vibe, with the abstract lining.
What would I do next time? I would interface the hem to give it more structure. Although with the softness of the corduroy, I think I get away with it. I also could have interfaced the collar (I didn’t make the hooded version), but I like the softness of the collar in cord.
The topstitching on the hem wavers a bit just over one seam. When I pointed this out to my husband he said “The only people who would notice that are you and the people who read your blog! Everyone else wouldn’t”. He’s right.
The feedback from the other male of the house, my 16 year old son, was “Looks like a real one”. High praise from him, but hang on. Real one? Seriously, that child needs to be worded in. Sheesh!
In conclusion, I would like to take a deep breath and say that this is the most satisfying project I’ve made ever. I know I will wear this a lot, for a start. That helps with the satisfaction rating. Secondly, the lined jacket thing was a bit of a milestone for me, and I’ve ticked it off without too much angst.
So now, I’m off to make another lined jacket, McCalls 6441, while I’m in the lined jacket groove.
PS. Just wanted to note that after finishing this jacket, I gave my sewing room a clean, and I found the button I’d lost for the SilvaShirt Jacket. Under my sewing machine table. I looked there multiple times, and don’t know why I didn’t see it. Never mind, happy days. I knew it couldn’t have disappeared into the ether..

jacket Made by Me Sewaholic