September 06, 2014
It’s been a while since my last post. After making some big plans in July, it has been a winter of sewing discontent around here. I did not make my deadline to make a jacket, pants and blouse for a lunch at the end of August. About a month ago, I came down with a weird virus thingy that hasn’t been bad enough to send me to bed or take sick days, but has been bad enough to have me choosing an early night over the sewing machine most nights. So progress has been slow. And in the end, I felt too under the weather to haul myself to Sydney for a lunch, so I cancelled anyway.
So where were we.. oh yes, McCalls 6441.
After my last hissy fit of a post,  I poked around the net to see if I could come up with another pattern, so I could boot McCalls 6441 out. Then I gave myself a good talking to, and told myself to woman up! Was I going to let myself be defeated by a paper pattern just because McCalls didn’t use/forgot to use/forgot how to use a measuring tape in making their finished pattern measurements? * No way! So I persevered.
Finally,  it’s done. And here is the jacket that has emerged… 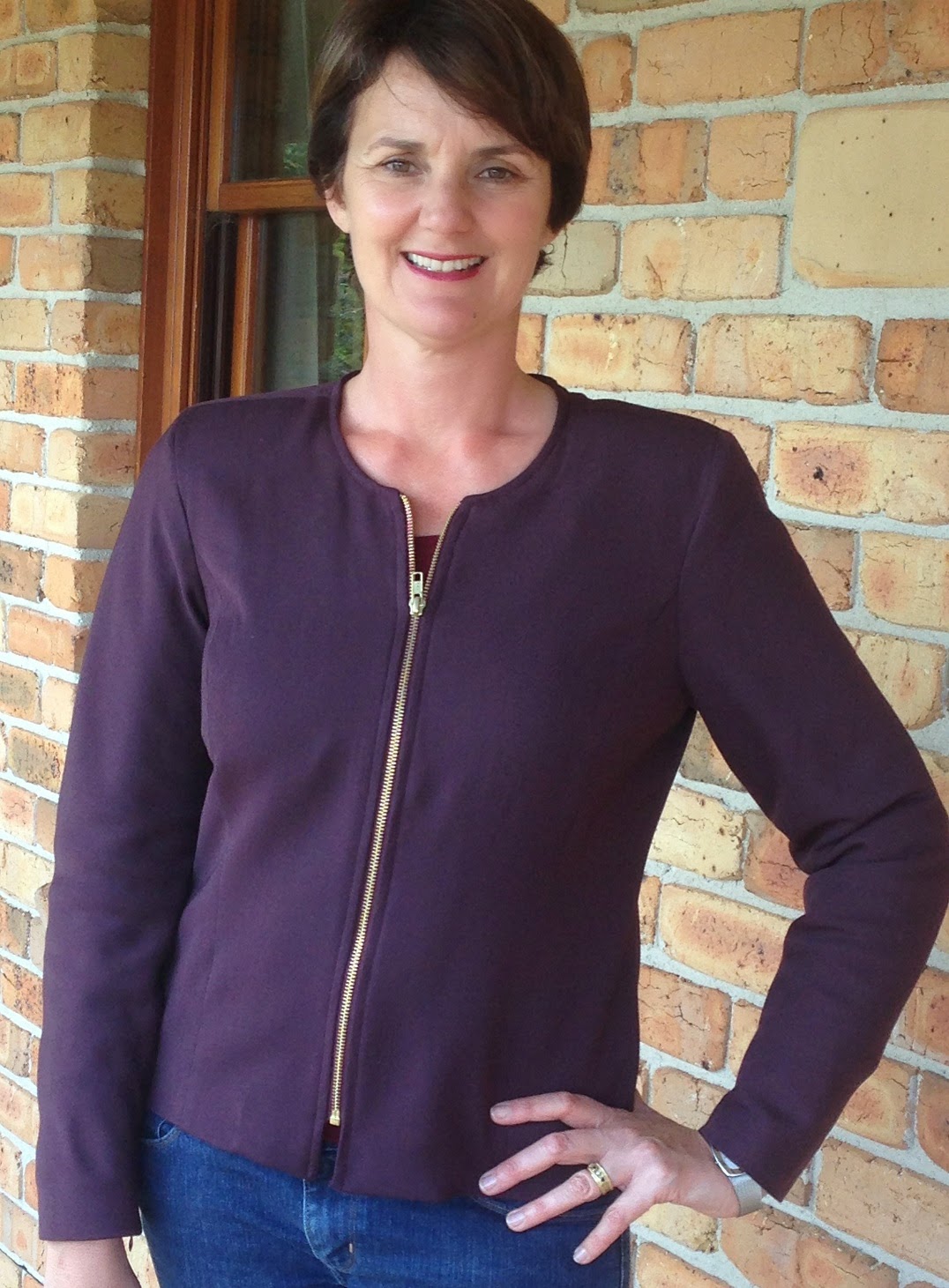 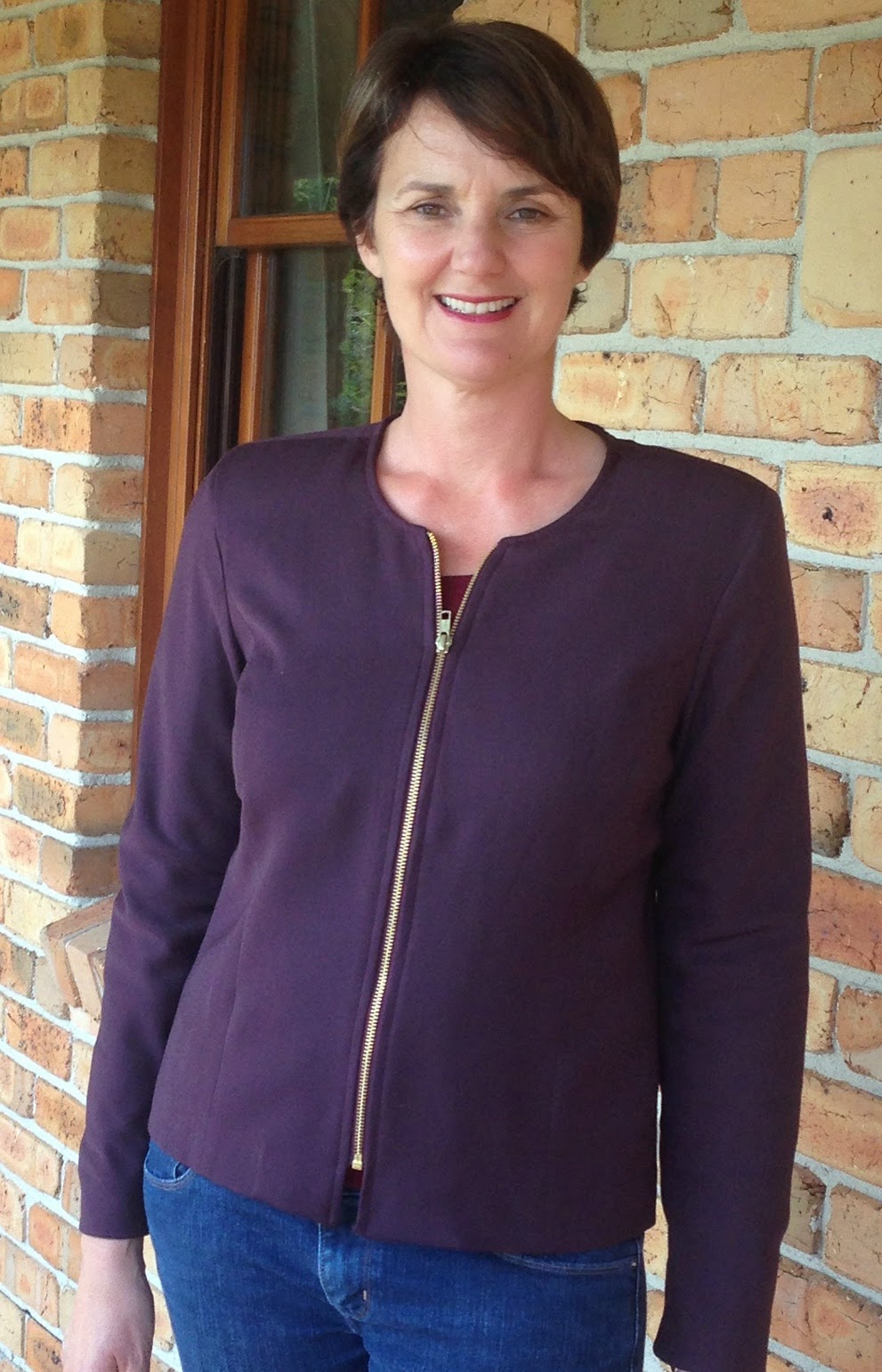 The fabric
A wool/rayon blend suiting I picked up at Paron’s Fabrics in New York in 2012. I remember that the swing tag had the note “Anthropologie” on it, so I assume this came from their manufacturer.
I have never come across a wool/rayon blend before (I think the proportions were Wool 80%/Rayon 20%), and this is the nicest suiting I have ever seen or felt. It has the springy feel of wool, with the drape of rayon. I’m heavily into the tactile qualities of fabric, which is why I don’t buy a heck of a lot of fabric online, and this feels so luxurious. This very quality meant that I kept it in the stash until I felt confident enough to cut into it. After the success of the Minoru, I felt ready to crack on with it. Working with it was a dream too.
The zip is also from New York, from Zipperstop. And the lining – bemsillk from the local Spotlight.

Fitting
This is a Palmer/Pletsch fitting pattern, but I ignored the fitting instructions on the pattern. Although I often refer to their book Fit for Real People, I find their advocacy of the tissue fit to be a bit hard to do practically on your own. For a start I trace my patterns, and the paper I use doesn’t behave like tissue. And in any case, how do you tissue fit yourself, keeping the paper in one spot, on one half of you, as you assess fit and make changes? I tried it once, and it was a disaster. Maybe you have had success fitting yourself in tissue as per Parlmer/Pletsch. If you have, please share your tips!
OK. Fitting this pattern took a bit of doing (see previous post) . Not hard, just time consuming. Here’s  what I did:
First I put a big mental black texta cross through all the measurements, including the finished pattern measurements, since they were clearly wrong. Instead, I measured the pertinent points at alleged size 14 and found that this size measured 92cm at waist (as against their stated finished pattern measurement of 80cm). I had originally cut size 14 bust according to my high  bust measurement, with the intention of doing an FBA, and kept to that measurement, and cut a size 14 at waist and hip. Just to remind you: I measured myself as being between 16 and 18 at waist and hip. So I muslined a straight 14, then made an FBA.
(I know from reading sewing blogs over years that this is standard practice for many sewists, that is, sewing Big 4 and particularly McCalls patterns one to two sizes below that indicated. Not having sewn much in the Big 4, and never a McCalls, I guess I didn’t believe it until I experienced it myself.)

There was still bucketloads of ease to deal with even then. These are the adjustments I made in order (as I can remember them:

·         Took out 5cm of ease at the back below the shoulder blades, divided between the centre back and princess seams.
·         A swayback adjustment of 2cm.
·         Cut the back neckline 1”lower at centre back.
·         Then I had to address a lot of ease around the neckline and upper chest, which is not something I normally have had to deal with.   I find that cutting out the upper body according to my high bust to do an FBA does indeed give me a good fit in these areas, as the theory goes.  But in McCalls 6441 – no. So I folded out a horizontal wedge of about 1”total at upper chest, and then folded out about 1”from the neckline on either side of centre front. So yes, not minor alterations!
·         Then I took in the side seams about 1cm, for a total of 4cm taken out.
·         I shaped the front princess seams  below the bust. For a princess seam jacket that is described as closely fitting, the shape as drafted was pretty boxy, with hardly any waist shaping at all.
So after getting rid of about 10cm (4 inches)of width the bodice was done!  As you can see from this photo, I could have fitted more closely in the back. (And what is going on with the line of left shoulder? I didn’t notice anything until now.. I’ll have to go back and investigate.) 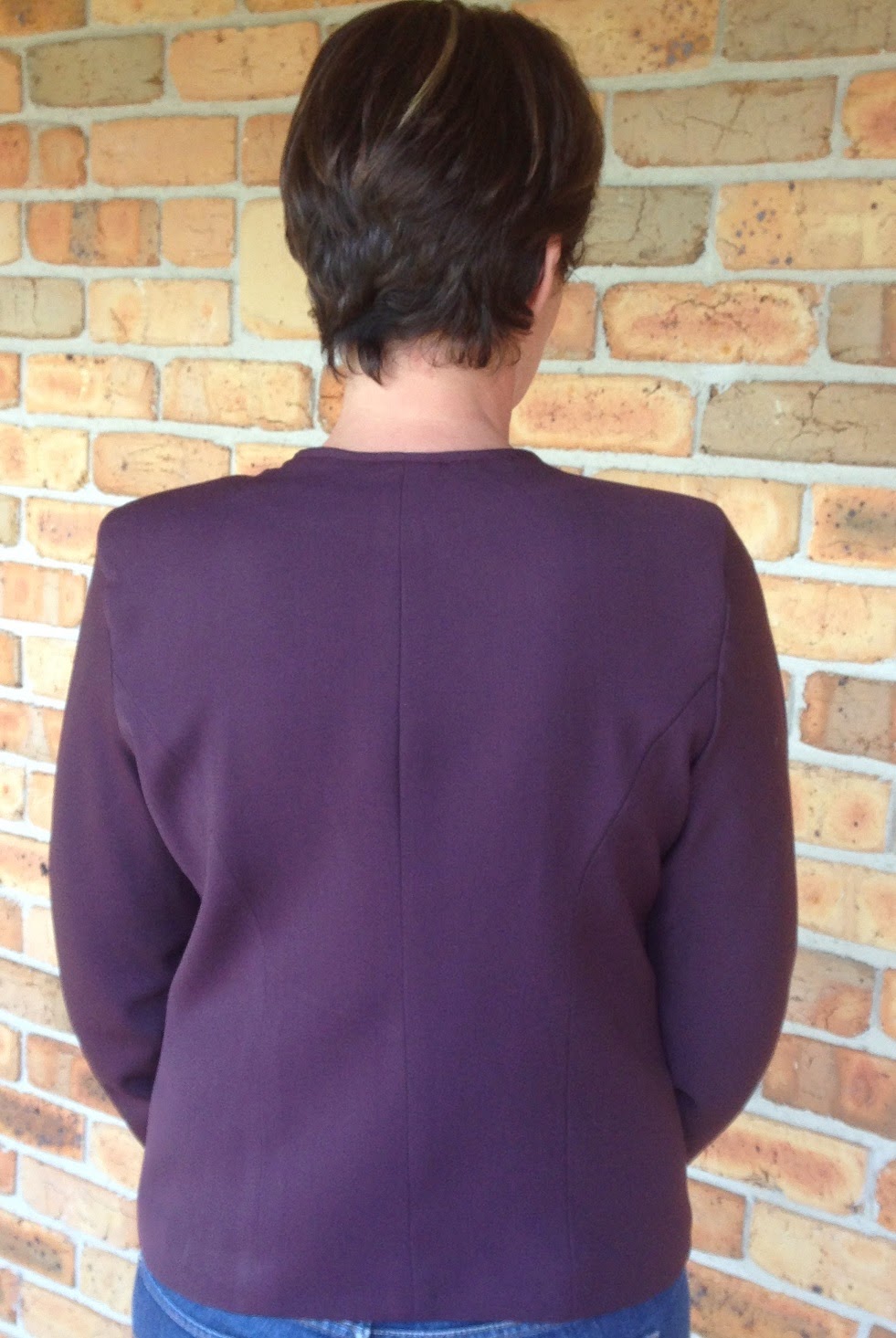 The sleeves needed my standard adjustments: A full bicep adjustment of about 1”and lengthening of 3cm (sorry to toggle between metric and imperial, but I seem to have become bilingual as far as measurements are concerned). I also cut my sleeves on the bias which I normally do with long sleeves. I find that sleeves bunch uncomfortably around my elbow even when I have plenty of width. Cutting on the bias helps with wearing comfort without having to add extra width in this area.
I measured the armsceye and sleeve, and even though the  sleeve head did look suspiciously high, I found the difference was only 2cm. Still I shaved off a tad (about 0.5cm from the sleeve head between the notches)  to address any potential issues with easing the sleeve in.
I drafted my own lining and facing pattern pieces. I had made so many fitting changes that the pattern pieces provided had become irrelevant.

Construction
My fabric had a lot of drape for a suiting, probably from the rayon content,  which I wanted to counteract so I applied interfacing to the body pieces in their entirety.  I also applied interfacing to the sleeve hem and around the zips on the sleeves.
I pretty much followed the construction order of the pattern instructions.  However, I did make another upgrade by making sleeve heads out of wadding. Those 20cm x 3cm pieces of wadding made this jacket, in my opinion, giving it a nice line around the shoulder.
And the sleeves themselves went in like a dream.
When it came to inserting the lining, I toyed with the idea of bagging out the lining with the machine, but in the end chickened out. I followed the pattern instructions, which was to sew hems and attach the lining by hand. 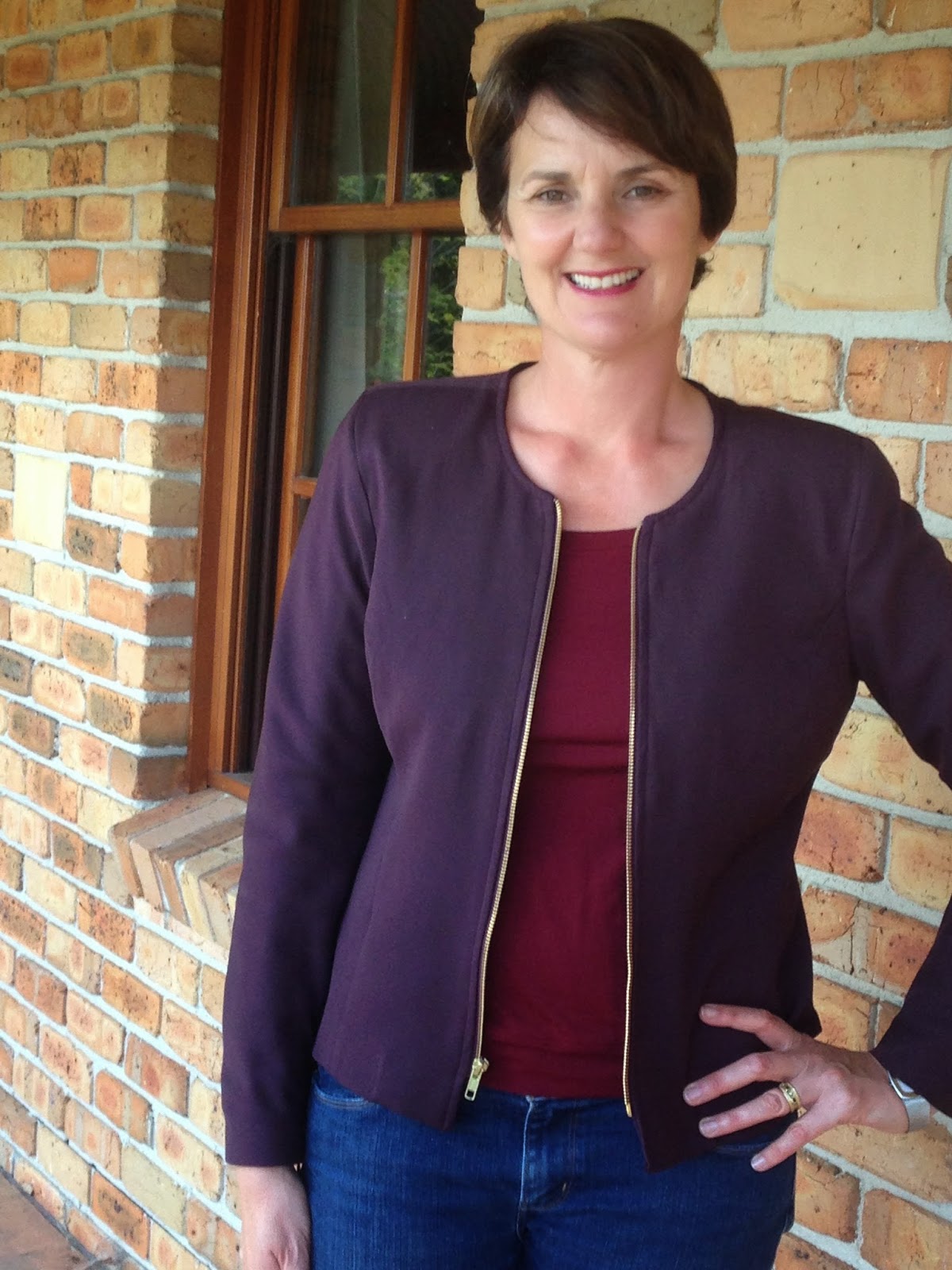 I’m pretty happy with how this has turned out. This is a jacket which is no trailblazer in the fashion stakes, but is classic enough to be a workhorse in my wardrobe for quite a few years to come: a worthy use of some precious fabric.
The styling is boring, because I don’t have a lot to wear with this jacket yet. I have some fabric to make a pair of pants to make a pantsuit. And I plan a few tops to make a bit of a mini-wardrobe for those half-dozen times a year when I dress up.
Whoa! So much to say about such a simple jacket…

·     *     I sent McCalls an email outlining the problem I was having with ease on this pattern. Kudos to them for sending me an acknowledgement almost immediately, saying they would get back to me. But that email was sent at the end of July,  and I’m still waiting…
jacket Made by Me McCalls wool