October 04, 2014
My plans in July were to make a pant suit by the end of August. Didn't make that deadline, sadly.
Still managed to complete the pant suit a few weeks ago, the blogging has taken a while, yes!

The pattern I chose was Named Clothing Cameron Flare Pants, because my fabric, a wool/rayon blend, has a lot of drape, and I was looking for a pattern to show this off. 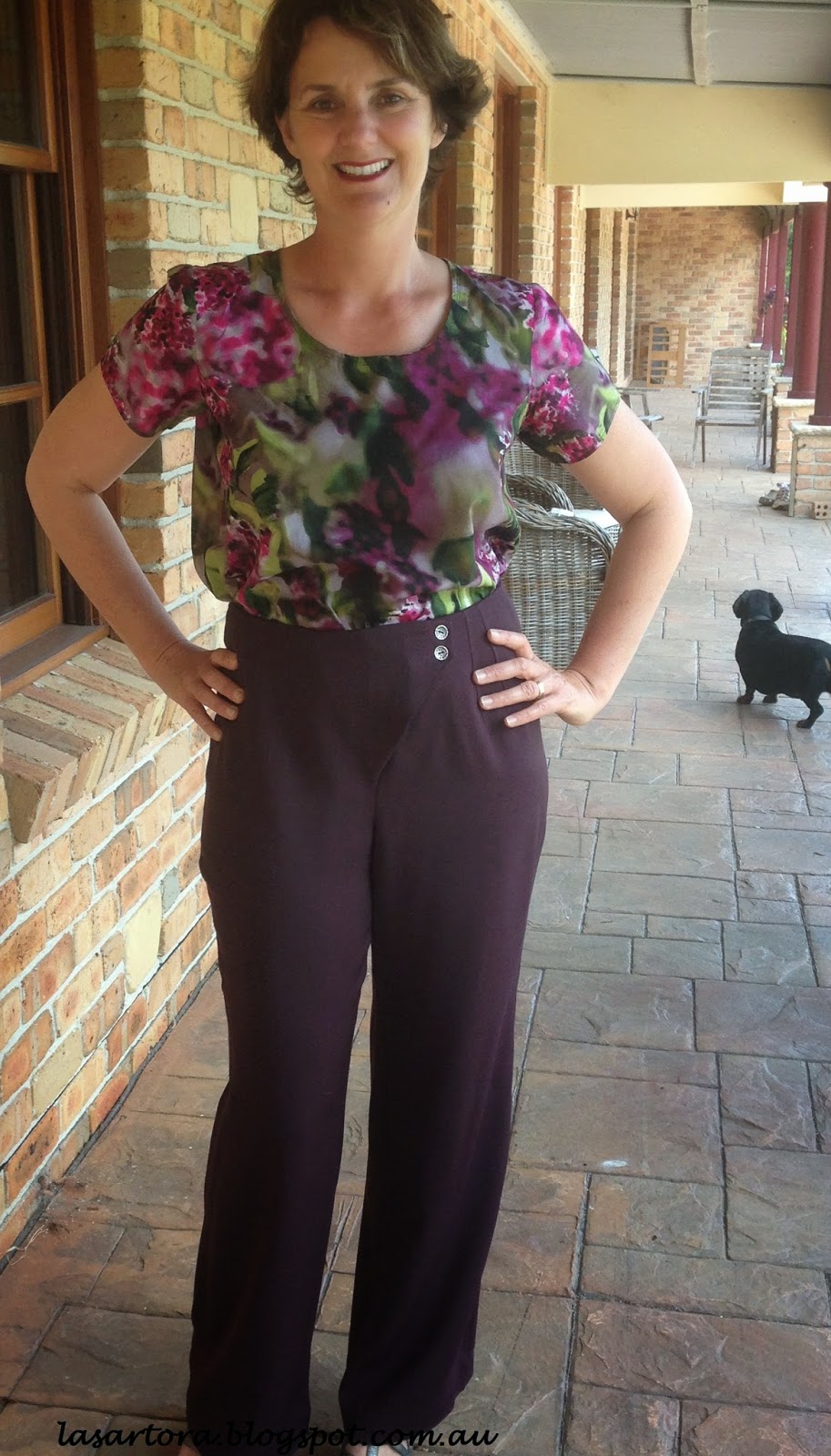 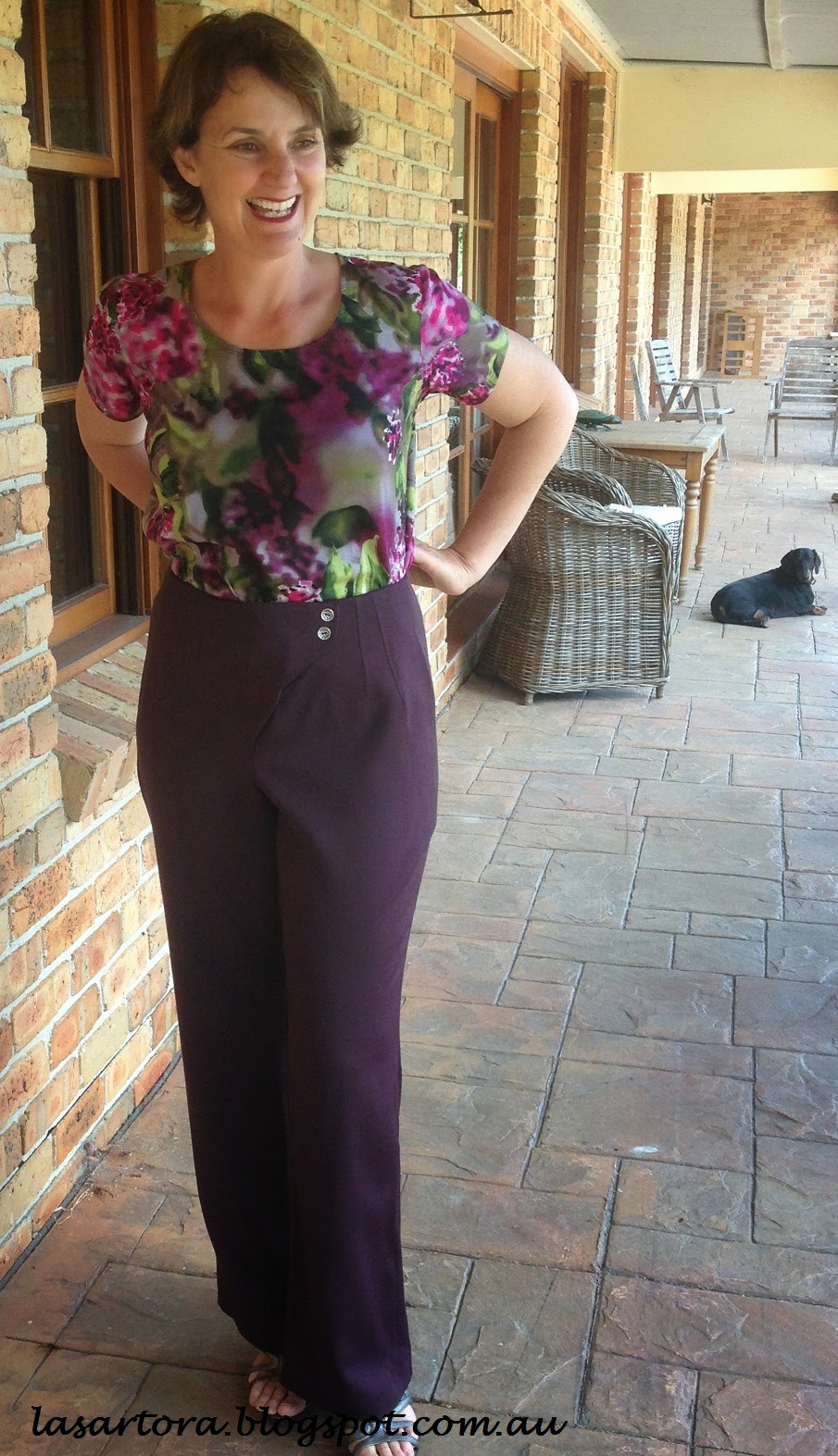 Same pants, this time dachshund is on sentry duty

This was my first foray into working with Named Clothing.  As a newcomer to Named Clothing patterns, here are some things you might find useful to know:


These pants feature a “wrap” front, and back patch pockets. Apart from that this pattern is identical to my pants sloper. I was a bit bemused with myself when I realised upon purchase I had spent $20 on a variation of a pants sloper.(Sometimes it’s hard to get a handle on how things are constructed until you actually look at the pattern pieces, in my own defence). On the other hand, could I be bothered figuring out how to draft that triangular bit? Answer: No.  On balance I’m more than happy to pay someone to do this stuff, although I do think that $20 is getting on the outer edge of acceptable for a pdf download.

My measurements had me at a straight 42 in Named. I got out my pants sloper to compare, and happily saw that the sloper and pattern were pretty  similar – the pertinent points at waist and hip were identical, as was the crotch seam curve. The changes I made were to reposition the darts, lengthen the back crotch hook (My pants sloper features a a VERY long back crotch hook – I added 7cm here), change the shape of the front crotch from a J shape to an L and shorten, and redraw the waistline edge – all to match my sloper.

I really had to scrounge out these pants from my available fabric: that extra long back crotch hook takes up a lot of space, and was one of the reasons I had to cut out using a single layer of fabric. And honestly, a 1cm seam allowance was all I would have been able to do anyway. It was piece against piece on the layout. But I managed.

Named Clothing has the order of construction as follows: construct pants, insert zip, make buttonholes, which I thought was a bit weird, not to mention difficult. However, to give them their due, they do make a point that their instructions aren’t the last word, and if you have another way of going about sewing up these pants, do it, which I did. I inserted the zip and made buttonholes on the front pieces first. Then, I constructed the pants, applied the facing and hemmed using my blind hem foot.  This just seems much easier to me.
This is a very easy sew. If you can sew a dart, you can sew these pants. That wrap front is easy to construct, and does away with the need to make a fly front, which I find to be the most time consuming bit of sewing pants. I didn’t bother with the patch pockets, because I seriously don’t need patch pockets on my backside. It is prominent enough all on its own. 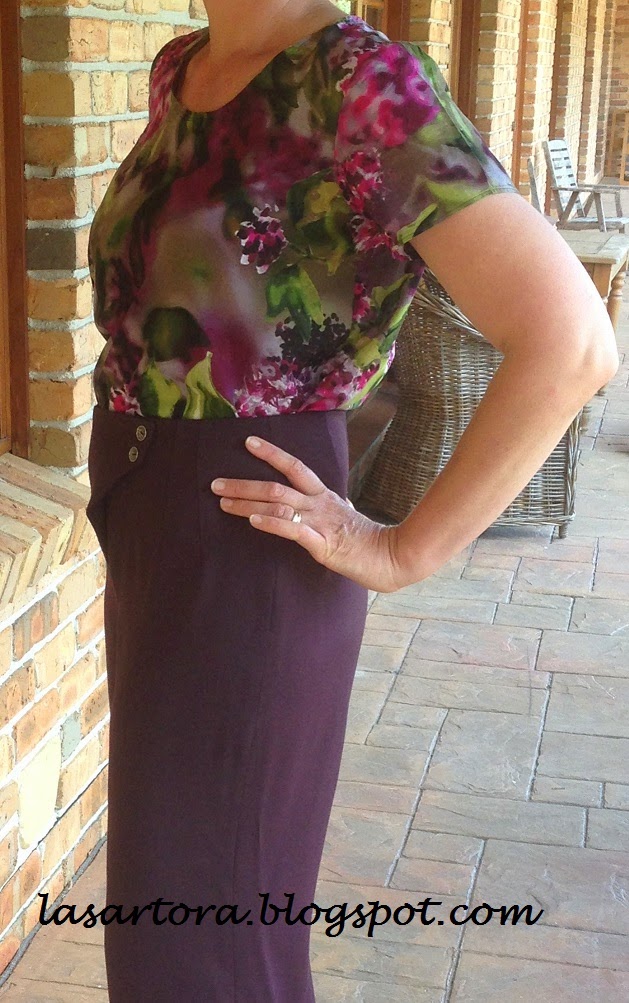 The only issue I have with this pattern is how the front triangular wrap does not sit flat- the diagonal edge sits out from the body.  See this in the photo above? I repositioned the buttons, but this only made a slight difference. The bottom edge of the wrap front is on the bias, and I think this has stretched out a bit. The lovely drape of my fabric is great for the pants, but not so great for the stability here. And if I'm honest, my rounded tummy is not helping matters. If I did this again, I would sew some twill tape along this fold line, and add some topstitching to try and stop this happening. Or interface. Or take some length out of that fold. Not to worry,  I rarely  never tuck in my tops, not a major problem, really (I'm tucked in here for blogging purposes only). But you might be a tucker-innerer, so be warned. (You might ask why went  for this pattern at all, since the one design feature will be covered? My answer to this is, sometimes you just have to sew something different well,  just because) .

Not convinced by the metal buttons I’ve used. I might change these one day. 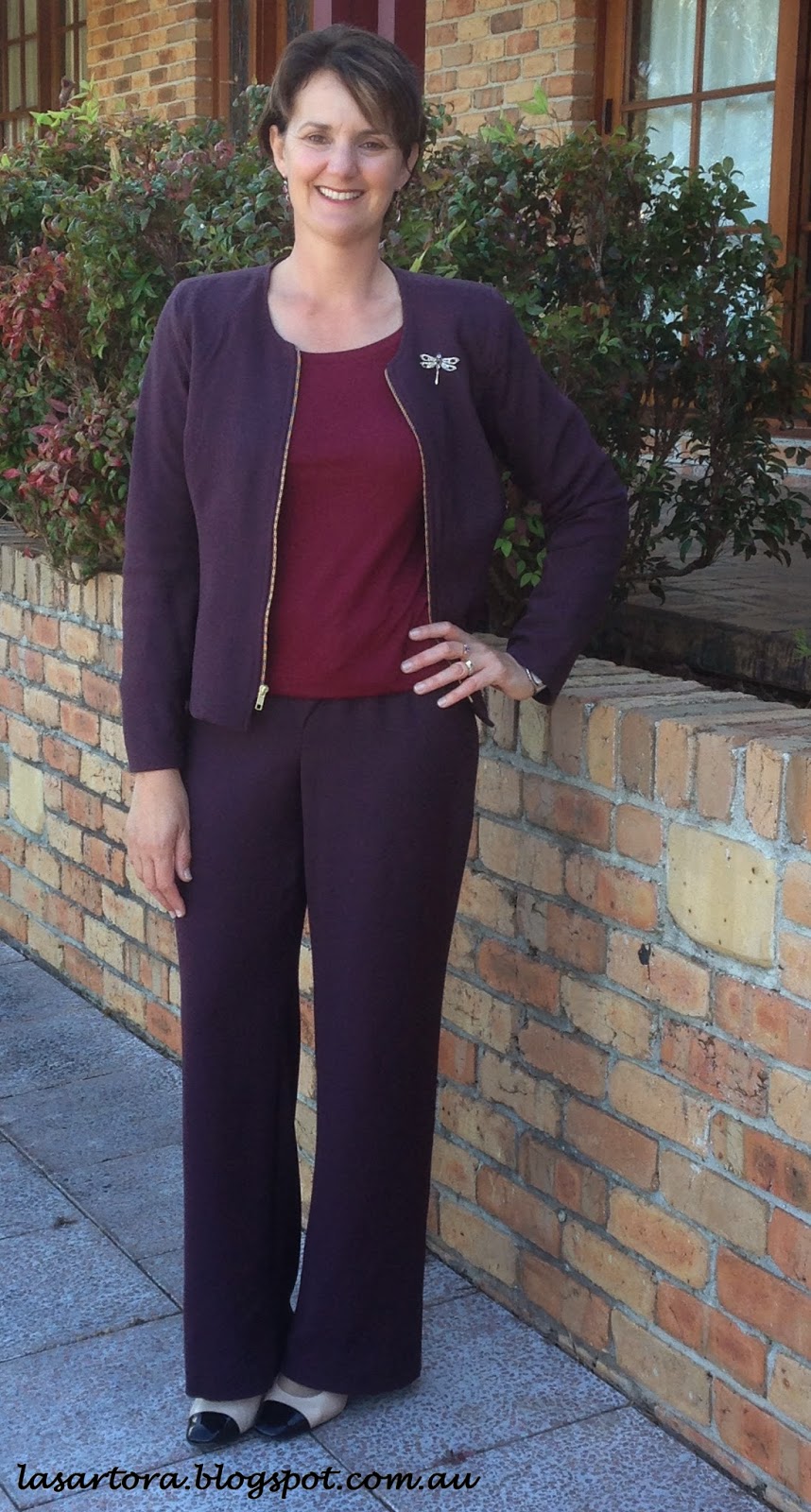 Happy with how these look pants with my 6441 jacket. This was taken a few weeks ago, on my way to a family lunch. 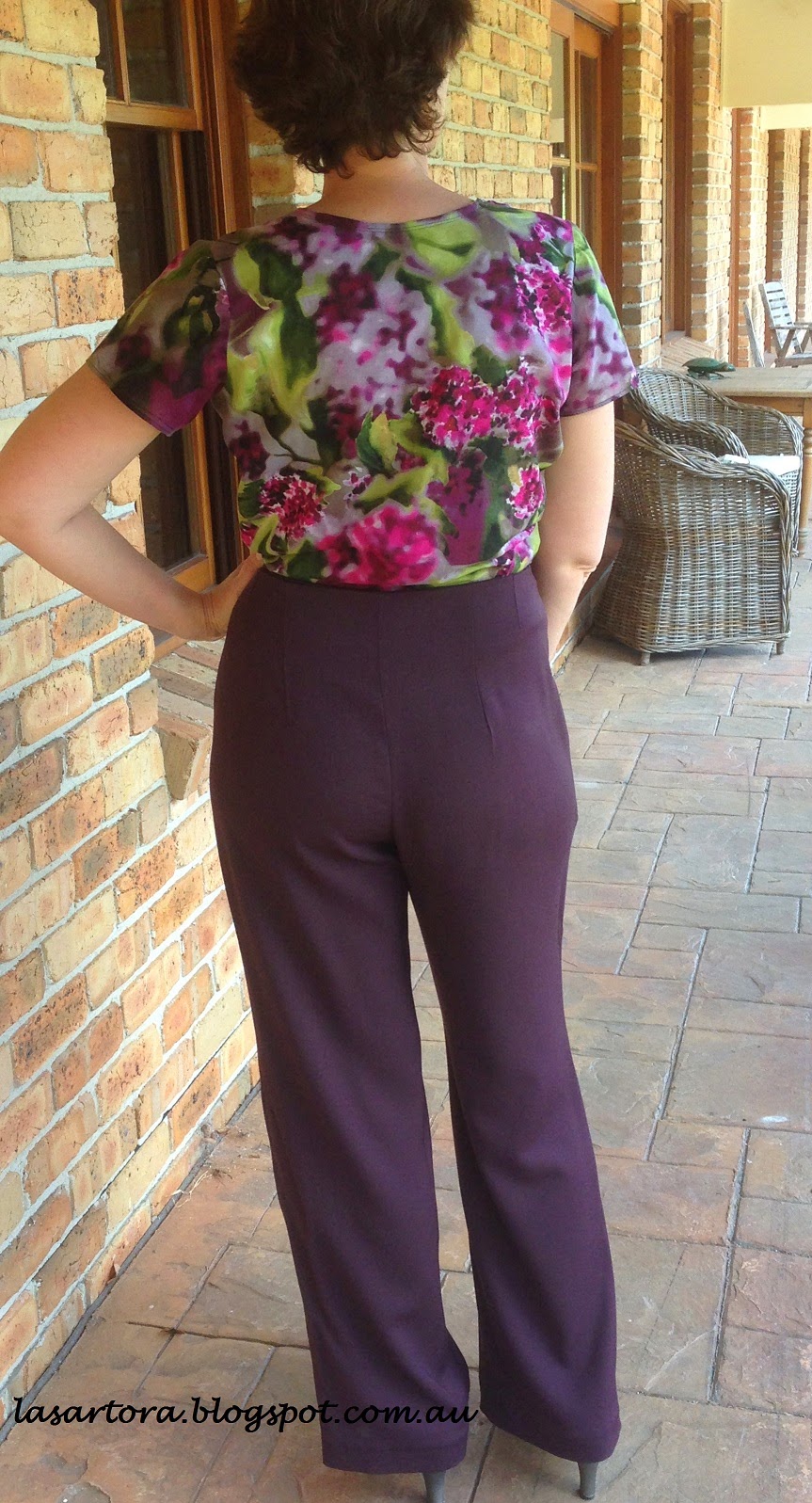 Goal of making a pant suit in 2014 ? Tick.
Made by Me Named Clothing pants the dachshund