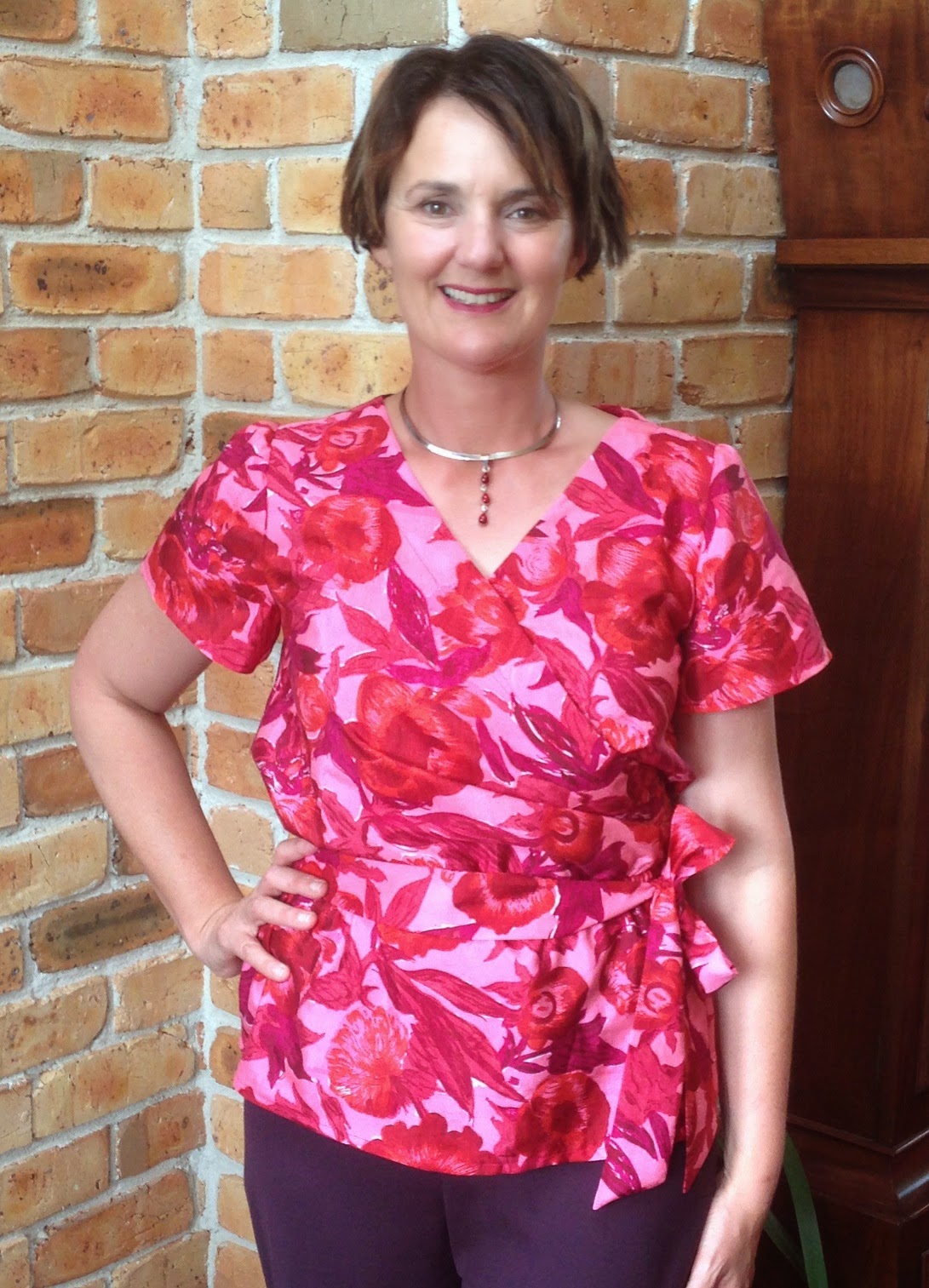 This is a wearable muslin for a dress I had in mind for wedding guest wear. More on that later. First
to the pattern.


This is the latest pattern from Sewaholic. It is a faux wrap dress, with elastic waist, flutter sleeves and tie belt.

I liked the soft silhouette, great for a garden wedding I thought. And I do enjoy a flutter sleeve (I used to work with a boss who never  “liked” something. He always “enjoyed” it. This unusual example of English usage has lodged itself into my brain, and resurfaces every so often, even after 17 years).
The fabric is a silk/cotton blend I bought in Cabramatta a long time ago. It was cheap, from what I remember. It’s been sitting in the stash, because I was never quite sure how to wear that pink-and-red print. Anyway, it’s cheapness makes it a perfect wearable muslin candidate.
I cut an 8 at bust, grading to a 12 at waist and hip. I did a 1” FBA, using the Sandra Betzina “pop” technique which does away with the resulting dart from more usual FBA methods. I lengthened both the peplum and sleeve by 1”.

It was an easy sew. I mostly followed the instructions, apart from doing French seams on the side and shoulder seams. If I made it again, I might replace the facing with a binding, though. That's just personal preference though. This facing is topstitched down, so none of my favourite pet hate, floppy facings, here! 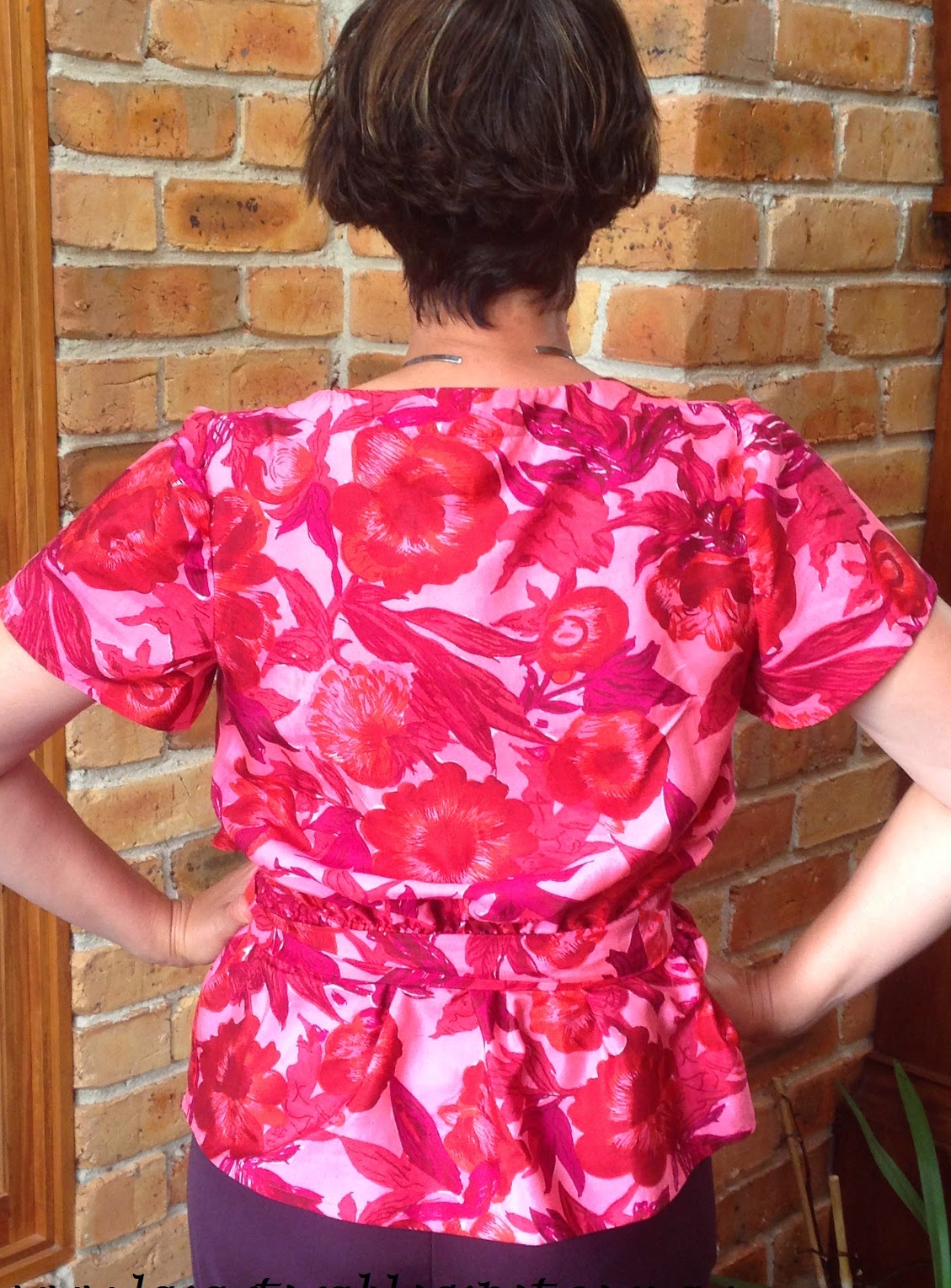 I’m wearing this with my recently made Named Clothing Cameron Flare Pants (you can just make them out). The best part of this outfit is that I am living my childhood dream of wearing pink, red, and purple together.
So back to the wearable muslin thing.
The Sewaholic Yaletown  was Plan B for my brother’s wedding. Plan A was to make a dress from May 2014 Burdastyle  to wear with a wrap I have, as I wrote about here. Search as I might, I could not locate the fabric to make my plans happen. I envisaged a particular turquoise blue, which I could not find anywhere, and wasn’t in the mood for compromise. Time for another tack.  So I went stash shopping and found this silk/rayon chiffon that was a suitable dressy event candidate. Yaletown came out about the same time. Bingo. I had a plan. 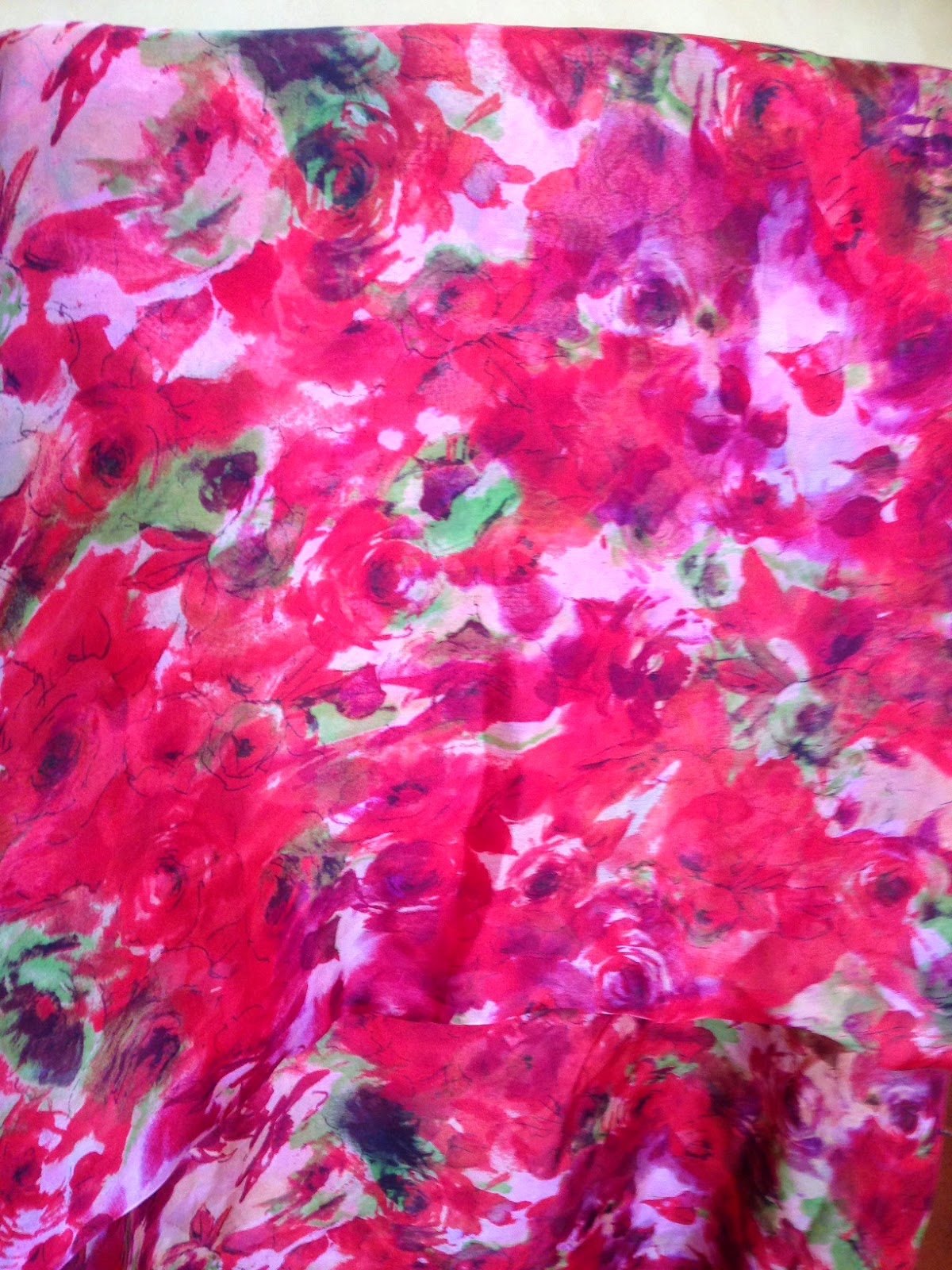 So I had the fabric and China silk lining gelatined* and ready to go. It was literally on the cutting table with the pattern pieces in place, scissors poised. But with 8 days to go until I needed to wear this dress, I baulked.  This is why:


So there it was. If it hadn’t been for factor (2), I probably would have pressed on. But I’d lost my confidence to the point where I was stressed about the dress and hadn’t even cut it out, let alone sewed a stitch. On balance, I decided to skip it, especially as I already had a RTW lurking in the wardrobe that would do the wedding job just fine.
Instant relief!
I’m guessing this scenario is a common one with people who sew. Over the last few years, I’ve got to the place where I make most of what I wear. The only RTW I’ve bought in recent times is exercise gear and underwear. So I am in the mindset that if I wear it, I make it.
This project helped me realise that just because I could make it, doesn’t mean I have to make it, every time, all the time.
I am not meaning to imply that I’m never up for a challenging sew. But I definitely have to be in the right frame of mind, with no time pressure and have 100%,or at least 95%, confidence in what I am setting out to achieve.
So will this Yaletown dress ever get made? Maybe, but not in silk chiffon. More likely a soft cotton  or rayon that will get more frequent wear, in a suitable print.
Will I ever sew that silk chiffon? Who knows? I don’t know if I’m a silk chiffon type of person, actually.
Now I’m off to make a t-shirt!


(*the gelatin trick for light and airy fabrics really does work!)
dresses Made by Me Sewaholic silk