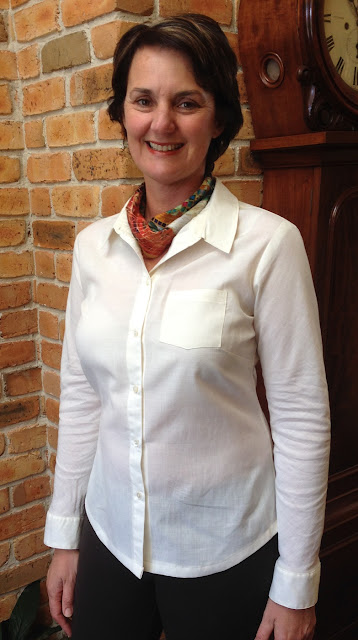 After my first go at the Sewaholic Granville shirt, I thought it would be a good idea to consolidate some of the shirtmaking techniques I had picked up by making another fairly quickly. I’ve also enjoyed wearing the first Granville, so I had to have another one, soon. And so, here it is..
I was pretty happy with the fit of the first one, so made no fit changes. The only issue I wanted to address was the slight constriction I felt around my bent elbow. This is after adding 4cm in width between bicep and elbow, which seemed to give me plenty of ease. Maybe my elbows are unusually broad. Maybe my arms do weird things when I bend my elbow? Whatever. I cut the sleeve on the bias to facilitate a bit more “give” in the elbow area. It’s a trick I picked up on a Pattern Review course quite a while ago, and it works a treat. You have to be a bit careful handling the pieces as you do with any bias cut piece. And I can see in the picture below  that there is a slight "step" between the bias cut sleeve and the interfaced cuff, but nothing that bothers me overly much: 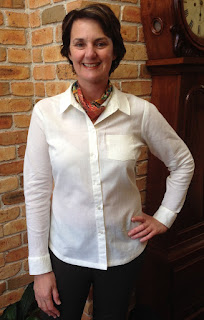 The sewing of the shirt went well, due in some part to the fabric. This is a fabric I estimate I would have bought in the late 80s, back in the day when Mum was sewing for me regularly, and my sewing skills amounted to sewing on buttons, and handsewing hems (Mum always made me do at least these two jobs on whatever she made). At that time, I was in my first “proper” job out of university, working in the Sydney CBD and would often head over to Flynn’s Fabrics in the Mid City Centre (sadly, both have evaporated into the either)  to purchase fabrics for Mum to sew up. Yes, I was a lucky girl, because as I have said before on the blog, Mum is a super-duper dressmaker. It probably also helped I was the only daughter in her family of five kids.
Anyway, I may not have known much about sewing , but kudos to me for choosing this fabric, which seems to be an especially fine handkerchief linen. There could be some silk there too, I don’t know. Mum never did get around to making this fabric up though, and it has been in her stash ever since. I‘d forgotten about it until she asked me whether I wanted it back not long ago. Did I ever! It just happened to be the sort of fabric I always have my eye out for, and in winter white which likewise is always on my list. 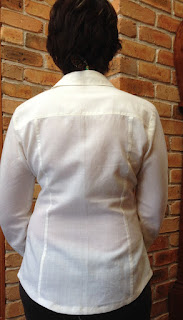 With this second Granville, I have to say I can feel myself becoming addicted to shirtmaking. This is a surprising development for me, being as I enjoy a quick sew as much as anyone. But there is something especially rewarding in executing each part of the shirt jigsaw as well as you can. It doesn’t  bother me that it takes about two weeks of sewing in one hour bursts to complete a shirt. I actually think that shirtmaking is suited to the time I have available for sewing at the moment. I can sew in a placket, or sew up a couple of flat fell seams, and feel like I’ve achieved something. Suffice to say, I have a few Granvilles in the mental sewing queue now.

linen Made by Me Sewaholic shirt