MBM - another Sewaholic Granville in Liberty


After making two previous Granvilles here and here, I felt confident enough to make yet another Granville with  some Liberty cotton I’d bought at the last Tessuti online sale in late June. 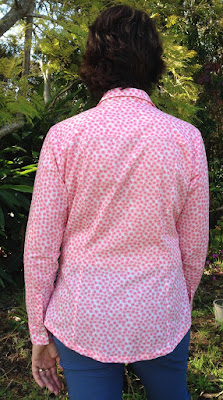 Unfortunately, that purchase wasn’t quite what I’d hoped, as sometimes happens with online shopping. The colour of the fabric on the monitor looked orangey. When it arrived, it was more pink – not a colour that I wear a lot of. Disappointing, as even at sale prices, Liberty isn’t cheap.  (That order was ill-starred, as I also ordered a length of linen in a colour described as “Denim”. The colour on the monitor looked mid-blue. The colour denim Tessuti was thinking about when they named this linen was a sky-blue . Sigh.)
Anyway, the pinkish Liberty grew on me, so I proceeded with the Granville.
I’d love to say that on the third try, this Granville came together quickly and easily. It did not. The light and airy Liberty cotton was more difficult to deal with that either the cotton or linen I had used before. It didn’t take kindly to being fashioned into the precision details of a shirt, but with the constant use of the seam ripper I came up with an acceptable shirt in the end.
Ok, enough of the long-sleeved Granvilles! There is at least one sleeveless version in the offing for summer, then I will be putting that pattern to bed. It’s such a classic pattern, though, I’m sure I will return to it at some stage. 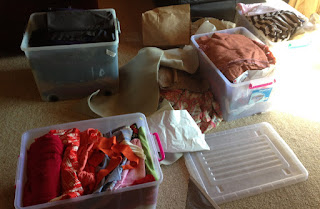 The stash sees the light of day
In other sewing news, I rearranged my stash! Exciting stuff! I don’t have a big stash, really. It fits in four large bins, and lives in a cedar wardrobe that belonged to my in-laws. To date, I’ve “filed” my fabric by colour. After dragging everything out, charity shopping some shockers, I’ve rearranged to fabric into the four bins as follows: Lights, Darks, Special Occasion/Miscellaneous and Ready Use, in which I’ve put all the fabrics I have plans for summer sewing. I’ve also put all the patterns I intend to use in with the fabric. I’m hoping this system will circumvent my tendency to procrastinate – the thought of locating a particular fabric and pattern is often a good enough reason f or me  to go and find something else to do.
The other exciting thing about sorting the stash was that I found a pashmina scarf I thought I’d lost – it was in a paper bag with a fabric I’d bought just on a year ago. I’d searched for it this winter, and had come to the conclusion it was a goner. But there it was, in time for summer. No matter, I’m just glad to have it back. 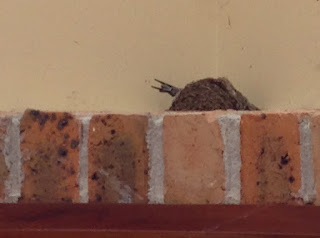 Nest, with swallow tail poking out for good measure
Back on the ranch..spring has definitely sprung, and the swallows have returned. We have a swallow nest in the gable above our front door which I am a bit superstitious about after my mother told me that nesting swallows are the sign of a happy home (according to legend in her part of Italy at least). The swallows built this nest about five years ago, and it has stayed there ever since, even though the blighters do make a mess of the front step. I’ve read that the local swallows spend winter in the Northern Territory, then return to their nests in Southern climes in spring. And they pair up for life.  This pair have spent the last week or so doing renovations, and it looks like Mum is now sitting on eggs.