The Style Arc Pearl top was one of their freebies from a few months ago. It caught my eye as something a bit different, even though it’s not something I’d normally wear.
The fabric is a viscose jersey I purchased at Tessuti a year or so ago. The colour reminds me of Dijon mustard. It has a good drape for this top.
This is a not too demanding sew, but there were a few tricky bits:

There is a bit of fabric origami going on there with the drapey pocket. Putting it together is not too difficult though. Just follow the directions literally, and try not to overthink it. The most difficult bit is getting a nice corner in the middle of the top. That took a bit of doing.
I had another case of twisting knits doing the hem on this. I guess hemming on the bias was the culprit. The front hem was ok, maybe because it was in two pieces. The back hem though: that twisted quite a bit and took a few goes to get right.
I ignored my sewing mantra “To avoid sewing regret, make an FBA” because I was just too lazy. There’s an admission! It does need one though.
I also ignored the fact that I would probably need to widen the sleeves – another pretty standard alteration for me. Although the sleeves didn’t feel tight, the viscose jersey clung to my upper arms so they resembled tightly filled sausages. Not a good look. I unpicked them, and replaced them with new sleeves, with a 2cm width alteration.
The neckline is a bit high for my taste. If I ever made it again, I’d just copy the neckline from the Renfrew t-shirt. (That could be another mantra for me in making knit tops).
I wore this to lunch at a friend’s place on Sunday. Initially I paired it with my Tessa pants – my daughter, resident style critic, gave me the thumbs down on that combo. She said I looked like I was wearing pyjamas. Replacing the Tessas with the Misty pull-on jean got a pass mark overall and I was allowed to leave the house J . 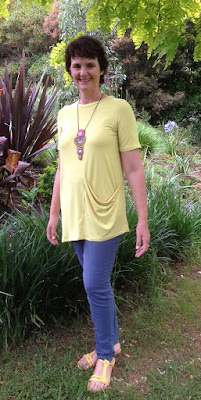 As I said, this pattern was a little outside the kind of style I'd normally wear. Not sure if it is me, really. Still, I’ve been “meh” about things I’ve made over the years that end up growing on me, so I’m not writing this one off just yet.
Style Arc tops