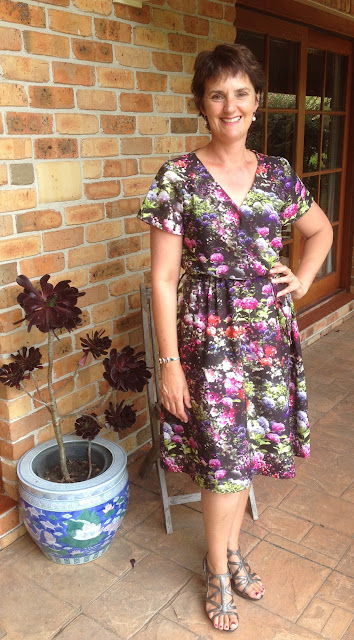 I first made the blouse version of Sewaholic Yaletown in late 2014, and have been waiting for a reason to make a dress version ever since. It finally came in the form of an invitation to a 50th birthday lunch. 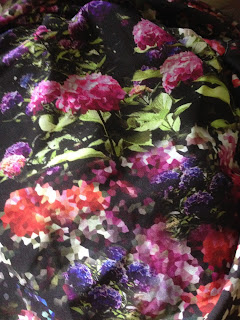 First of all, the fabric. I found this polyester of digitally printed and pixelated hydrangeas during a flying visit to Pitt Trading about two months ago. I was under serious time pressure, and was looking for some light cotton batiste to use as an underlining for another project. No go on the cotton, but this caught my eye, as well as a knit. In under ten minutes I was out the door with this. It was on sale too, so double bonus. Quite proud of my fabric shopping efforts here! (The project that needs underlining fabric has been relegated to the bench for now).
As soon as I had the invitation, this fabric suggested itself. At first, I was thinking of make Style Arc Olivia, another pull on dress with an elastic waist. But I quite like the Yaletown mock-wrap and the sleeves on my blouse version, and I had heaps of fabric – I might be able to squeeze an Olivia out of it in due course anyway.
Because the hydrangeas were printed lengthways on the fabric, and I didn’t want them on their side, I had to cut out crossways, which meant cutting out on the flat in a single layer, basically. That took a bit of time. Apart from that, Yaletown is a pattern that comes together pretty quickly and painlessly.
As for fit: I'd already made an FBA for the blouse version. For this version I lengthened the sleeves and skirt by two centimetres each. That was it as far as fit alterations were concerned.
I considered underlining or lining the skirt to give the fabric a bit of heft and to counteract static, but in the end decided I wanted the skirt to sit in soft folds, so I went for a separate slip made from cotton voile  instead. Nothing special there, just two seams, elastic waist and a hem, but it did the job.
Sewaholic suggests two ways of anchoring the wrap – a thread chain and button, or some judicious tacks. I went with the tacks on the blouse, but didn’t find them that successful – it was difficult to get the blouse over my head . So this time I went for the thread chain and button, even though if I had to name one sewing skill I don't have it is sewing thread chains. My mother is the Mistress of the Thread Chain, but I haven't inherited her facility here, sadly (An aside - Mum did a lot of embroidery as a child and teenager, and I suspect her superior hand sewing skills stem from a lot of practice at a young age). So I cranked out a few bumbling thread chains, for the front closure and as belt keepers, so I could wear this to lunch. If I ask nicely, maybe Mum will replace my efforts with  some proper thread chains for me instead!