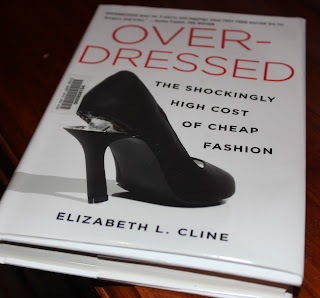 Like so many others in sewing blog land, I've recently read "Overdressed" by Elizabeth Cline. It doesn't surprise me that sewists would want to read this book, because so many of the issues it addresses speak to the reasons why we park ourselves behind sewing machines in the first place. At least it has for me.
After a childhood and adolescence of having nearly everything I wore made for me by my mother, I steadfastly refused to learn much in the way of doing it for myself. (Don't ask me why. I reckon it would need a psychologist to unravel the complex relationship my mother and I had when it came to learning to sew. Mum did her best pressuring me to sew, I stubbornly refused . I guess I saw it as a means of feminine oppression or something. For a while I was right, I didn't NEED to sew in order to clothe myself once I left home. In the end, though, the cheap clothes revolution means mother was right after all. Of course.:))
Once I left home, I did buy a machine, and would try to make clothes occasionally (I was earning not much money in those days, and cheap clothes were still in the future in the early 90s) , but it wasn't until I hit my forties that sewing made sense to me. Why did it take so long?
Well, for a start the cheap fashion ethos really hit home in Australia by then. Having been brought up to be used to decent quality construction and fabrics, I found the offerings in the shops very much below par. Sure, the clothes are cheap, and there were acres of them, but would I want to wear them? Answer: no.
The other reason goes to my demographic, women in their forties. Cheap clothes are made for people who care about latest trends..ie youngies. Hey, I was a trendster once too, but now, I just want stylish clothes that defy trends that will last beyond a couple of washes. Purveyors of cheap clothes just aren't interested in me, because well, they are purveyors of cheap clothes. Wanting to spend more less often on clothes that last just isn't profitable enough for the Zaras of the world, I am guessing.
And so, I sew.
Reading "Overdressed"is a disquieting experience. All those resources, poured into making a product whose shelflife is designed out of it, both in terms of design and contruction. When I think of it, I feel a bit nauseous, frankly. And at the end of the day, are we better dressed? Nope. THAT is the most distressing part.
Cline offers up sewing as an antidote to the cheap fashion binge. Although she  discusses sewing-from-scratch as an alternative,  in the end she identifies altering and mending clothes we purchase as the most sustainable route. Much as I would love to think more people would come to enjoy the creativity and satisfaction in making their own clothes, I think Cline's prescription is fair enough. The boat where women sewed their own clothes, as well as their families clothes, has well and truly sailed. Far more realistic to hope that people buy better, and fewer, and look after what they have. And hey, more men could learn a few sewing skills too.
Parenthetically, I often wonder at those end-of-year posts where bloggers tally up their output for the year. Not that I can think of examples off the top of my head, but you know, bloggers who make 26 dresses, 17 skirts, 34 tops etc etc.  I can understand the mad bursts of creativity that fuel this level of sewing,  I really do, but how many of these clothes actually get worn? And where are they stored? Just wonderin'.
Elizabeth Cline's book  does a great job of unpicking (yeah, pun intended, I couldn't help myself) the threads of how we've gotten to this sorry state of affairs. If you are a sewist, you will want to read this book. If you aren't, you should.