Made by Me - Colette Truffle dress 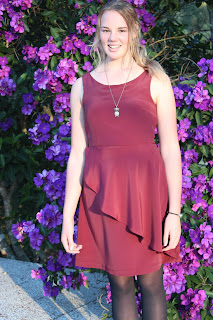 When I first bought the Colette Patterns book a while ago now, I thought the Truffle dress would be just the thing for my girl. Kind of grown up, but still pretty. Fortunately, she agreed.
We have my youngest brother's, her uncle's, engagement party coming up, so here it is.
Amelia chose the fabric on our recent trip to Cabramatta. Her priorities - look and feel. So she chose this drapey polyester. I tried to point out the downside of polyesters - ie. hot in summer, clammy in winter, holds stains, difficult to press etc. etc, but these cut no ice with her. She wanted a maroon dress, and this was the closest fabric she could find to what was in her mind's eye.
This dress was a first for me on a few levels. The first fitted dress I'd made. The first dress I'd made for Amelia. The first Colette patterns make for me (apart from Sorbetto).
I'm pretty pleased with how it's turned out. The Colette instructions are as clear as they can be, so if you don't stray from them, you can't go too far wrong.
This dress has four darts on the front bodice piece, so you really need to muslin this up to make sure they are pointing in the right direction, if you get my drift. (The dress is a bit of a dart-a-rama - 16 darts in all, including the bodice lining)  For Amelia, I had to lengthen the front and back waist darts, and do a small bust adjustment.
In a previous post I was scratching my head about the muslin, though. Although Amelia is standing up nicely for this photo, she does tend to slouch a bit, and this was causing pouffiness in the calico between the bust and the waist. As soon as she stood up straight, the pouffiness disappeared. I couldn't decide with to adjust the muslin to get rid of the problem, or leave it as it is and nag her to death. After advice from kbenco and Kristy, I decided to take a wee bit of length out, but accept that it would pouf out a bit at times. In the end, though, the polyester fabric behaved nicely in this instance, and it's weight pulled the front down, so no pouffiness.
I haven't worked with too many polys, except for the odd knit. A poly woven, never. I can't say that sewing poly was a pleasurable experience. If I let a bit of  the dress hang over the edge of my sewing table, whoosh, it was on the floor. I got a bit tired of that. And it would not press nicely, no matter how I tried. It doesn't look bad, though, just not the same crispness that I like.
As I said, I am pretty pleased with how this turned out. After the "issues" I had with the Anita ponti pant (that is, continuing to sew in the face of reality) I gave myself a good talking to. I decided to invoke some advice I got in an oil painting class. That is, "Evaluate each and every stroke, don't go on to the next bit until you are happy with what you've just done". That is advice that especially applies to sewing, don't you think'? It worked. 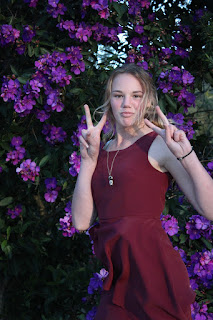 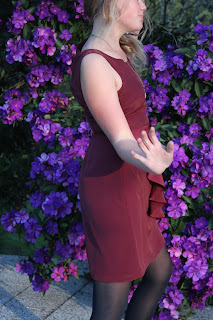 
Colette patterns Made by Me