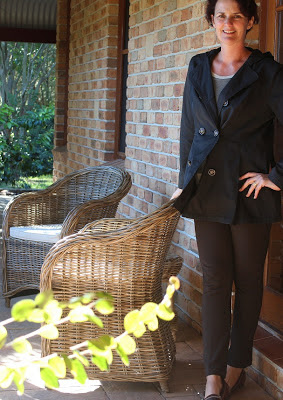 Even though the side seams on these Anita Ponti Pants are somewhat dodgy, I've still been wearing them in public. I need more comfy pants like these to get about in, so I ordered some more ponti from Tessuti. This time I'll remember to adjust the differential feed on the overlocker, though. 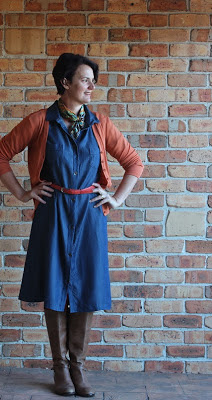 May 15
I quite like this combination, although it is somewhat costumey (and definitely dressier than what 98 per cent of people wear around here)  with the scarf and boots.
Wearing:
Dress: Simplicity 2246, Lisette Traveller Dress, blogged about here.
Cardigan: Perri Cutten. 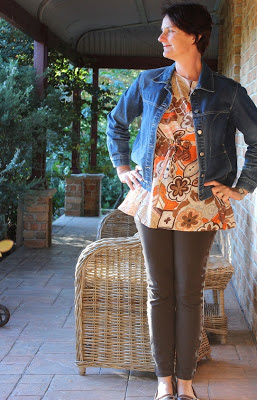 It's blowing a gale out there, and I'm wincing in the face of winds that have a hint of snow on them. Maybe the local version of winter has arrived, after the longest run of above 20 degree temperatures in May ever. This fact has played havoc with my MMM plans, as I counted on being well into wearing my winter wardrobe by now. It's still packed away.
And the Anitas get another outing.
Wearing:
Top: Anda, pre-blog make, Burdastyle downloadable.
Pants: Anita Ponti.
Jacket: No name, at least 10 years old.
In other news, I bought this book yesterday. 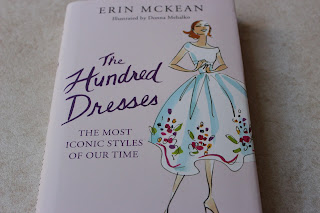 The latest book by Erin McKean of A Dress A Day fame. When I saw it, I just had to buy it.
It's a survey of 100 iconic dresses - everything from Princess Diana's wedding dress ("The Cupcake Bride") via Chanel, Jackie Kennedy, dresses of stage and books (my favourite, being a fan of Anne of Green Gables, the Anne Shirley) to Lady Gaga ("The Biohazard Dress") and every major designer, national dress (the dirndl, the kimono etc) and fashion era in between. And yes, for Mad Men fans, Joan Holloway and Peggy Olson get a listing, but not Betty Draper. Although Betty is kind of covered by the June Cleaver listing (at least the early 60s Betty).
I was a little disappointed at first that the book does not include photos of the original incarnations of the dresses, but on a closer look, the accompanying illustrations are charming. And the prose veers between hilarious and wise (the kind of book that Bill Bryson might write about dresses, should he be inclined to, which he wouldn't). For example, of the Biohazard Dress, McKean writes:
"The ideal outcome for a Biohazard Dress wearer is to send bystanders to the local hospital to be treated for shock and possibly dehydration, or at the very least, to be ejected from the venue by the local health department".
I can see myself dipping in to this book often in the weeks to come.


books burda Me Made May Simplicity Tessuti