All my own work, sadly 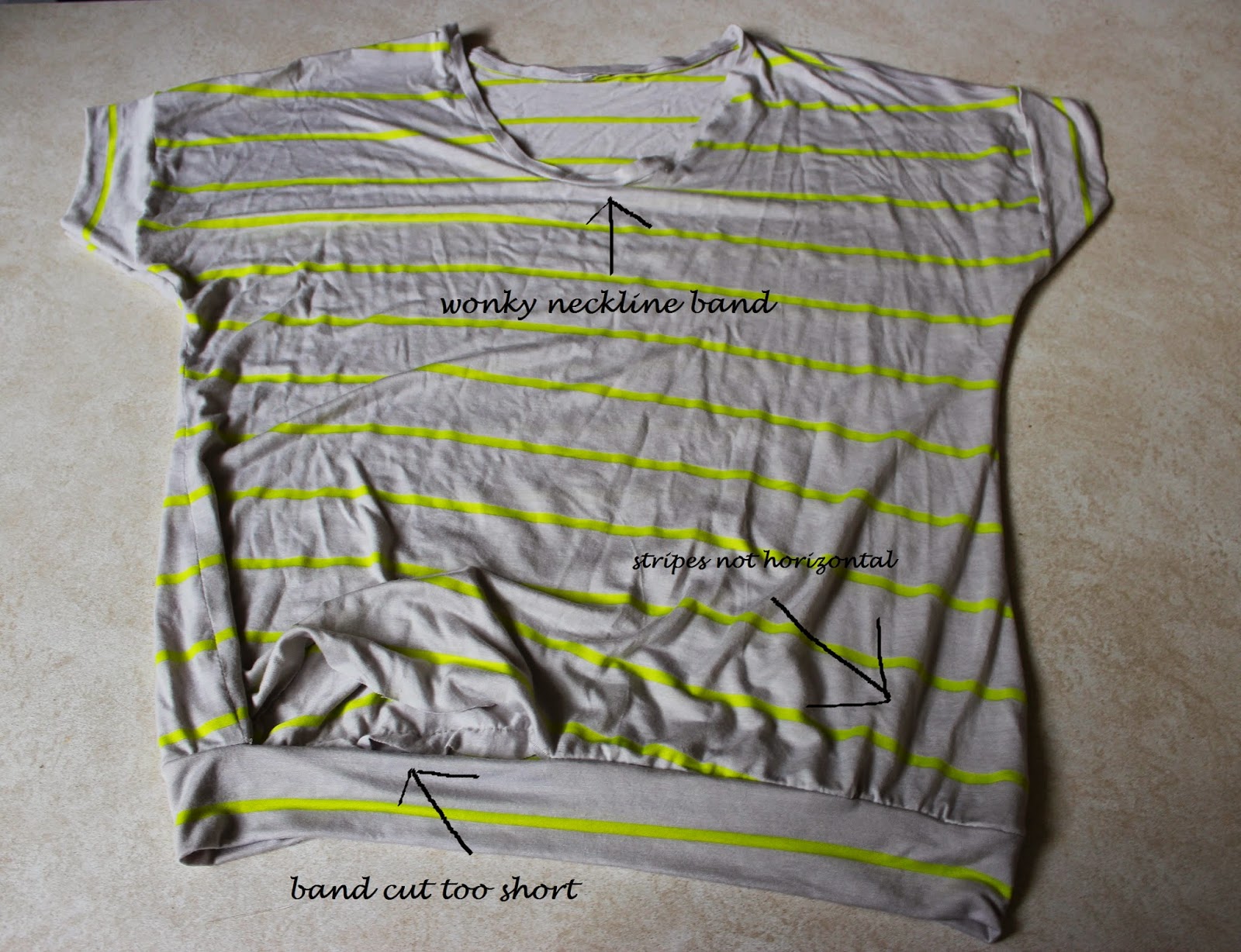 After the ups and downs of bringing the Gabriola skirt project to a conclusion, I was looking forward to a nice, simple project to bring me back to an even keel. I thought Maria Denmark's new Olivia Oversized Tee project would do the trick. Sadly, no.
I always appreciate it when sewing bloggers share their wadders. There is always something to learn, but let's be frank, it is also comforting to know that when you make a howler in the sewing room, you are not alone. And so, in the interest of service to the sewing blog community, here's the story of a Simple Tee Gone Horribly Wrong.
Alarm bells rang straight away on this project. I brought this fabric out of the stash, where it has been since I consigned it after washing in January. I did not notice then, but it sure was obvious now that in the process this stretchy rayon knit's stripes had gone badly awry in one corner. I should have bailed right then, but what did I do? Yep, I ignored this fact, in the hope that it was some sort of mirage, and would all go away.
So yes, matching the side seams didn't work too well.  As you can see these stripes are only horizontal if you have one leg substantially shorter than the other. Or are drunk. Or something like that.
The neckline band went in ok, but trying it on, I found that it flopped out. Probably a result of the slinky fabric, teamed with the rounded off V-neck. Annoying.
Then finally, when it came to attaching the waistline band, it became obvious that there was no way that tee was ever going to ease into that waistband. This was because I cut the waistband 13cm shorter than stated in the pattern. I cut the length for the neckline instead of the waistband, it seems. I didn't have enough fabric to cut another waistband but even if I did, I doubt I would have persevered, especially in light of the inadvertent diagonal stripes feature. I stopped just short of the end in a huff, and the tee-shirt went straight from sewing machine to bin, with a brief respite to be photographed for this post.
Sigh. I feel better for writing that.
So what have I learned? Mainly, proceed with caution when it comes to handling rayon, and do not sew if time or patience poor.
What next? For the first time in ages, I'm not itching to get to the next project. I have no gaping holes in my wardrobe that need filling. My lack of inspiration I think is down to the fact that I probably need a bit of wound-licking after stuffing up a tee.  Then I think I would be well advised to sew something  in a stable fabric.
Maria Denmark tops