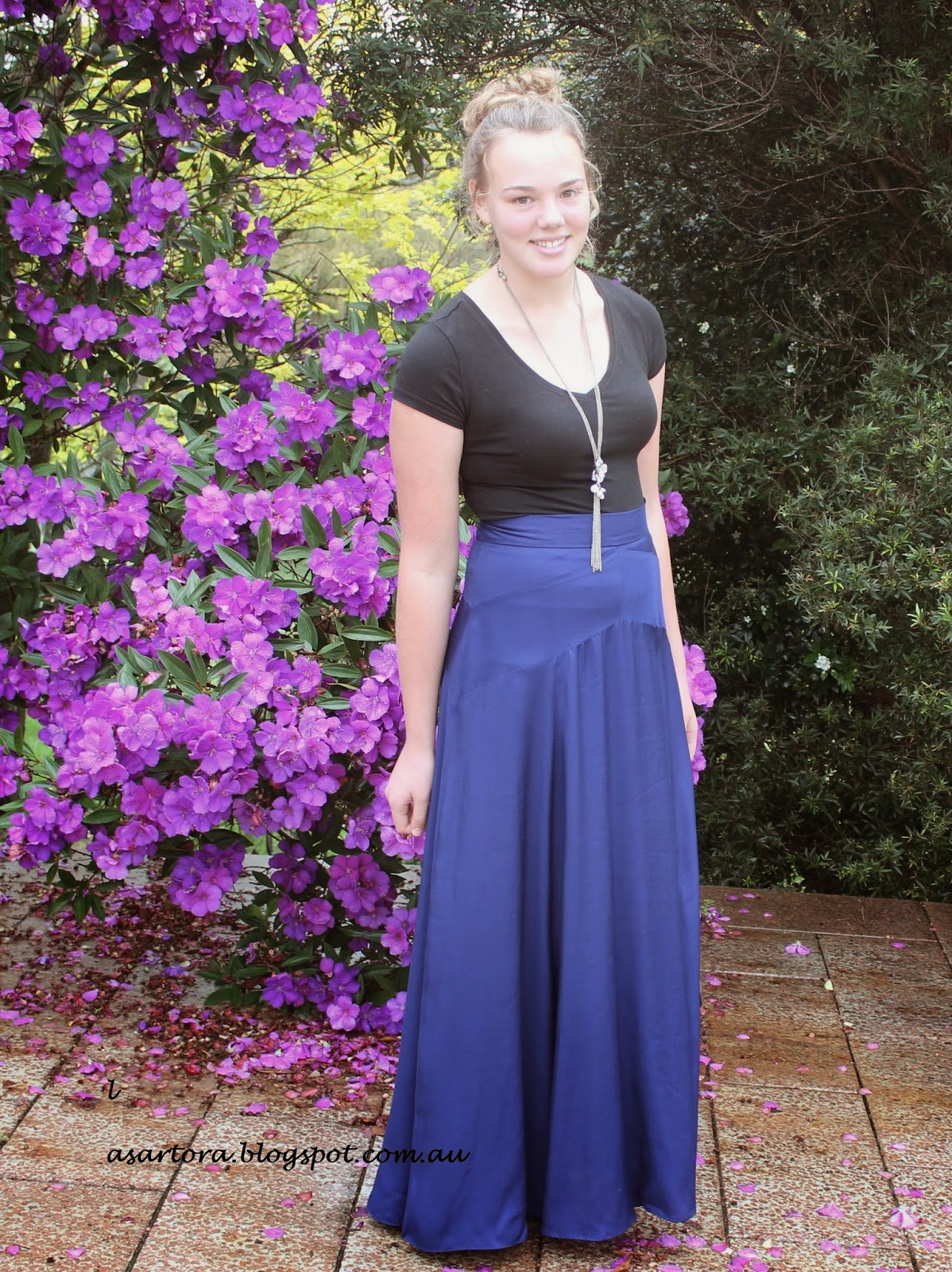 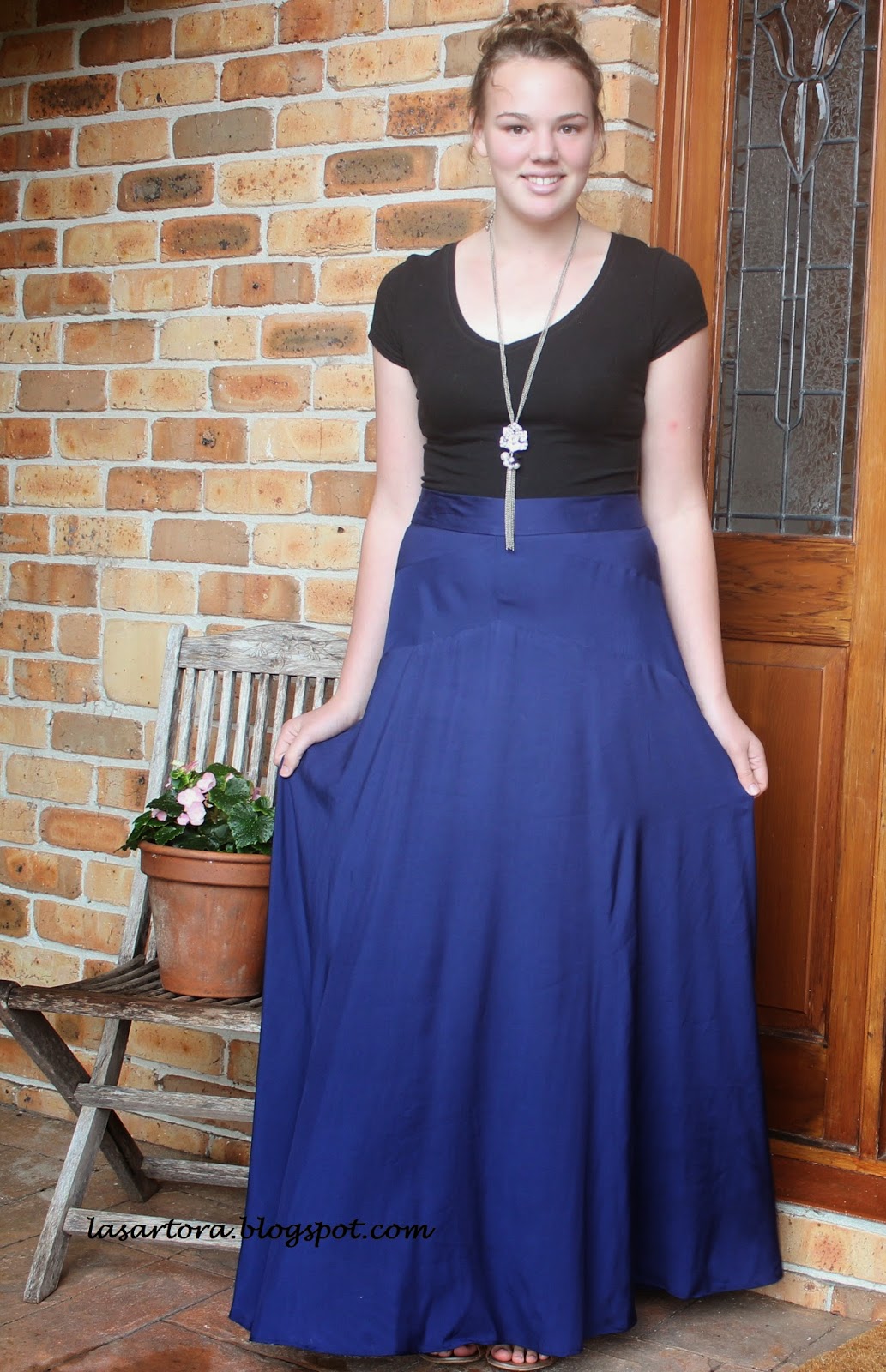 My daughter had her 14th birthday recently, so I asked her whether she would like me to make her anything to mark the occasion (I only sew for her on request, never on spec, because I know where those projects are likely to end up). She said yes, a maxiskirt, which was a bit of a relief. I was half expecting a repeat of the onesie trauma of last year.
Sewaholic recently released the Gabriola skirt pattern. The pattern is just lovely with some interesting seam lines to make the yoke, and a skirt that has a very satisfactory amount of swish and sway. Happily the daughter agreed. 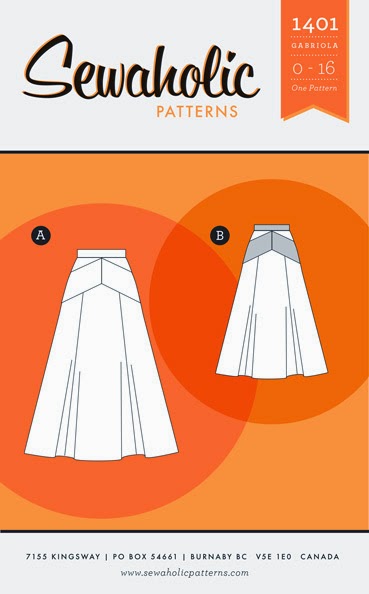 The pattern notes on the website point out that the Gabriola is drafted with a pear shape in mind. They are not wrong. My daughter is not a pear, more straight up and down (a celery stick?), with minimal waist definition. When I chose the size to cut, I had to cut the hip  three sizes down from her waist measurement. Three sizes. Wow!
I was interested to see how such a difference between waist and hip in the sizing would affect the way the yoke looked so I thought I'd muslin the yoke sections of the skirt. Looked fin,e so all systems were go.
That is, until I started on the fashion fabric. I'm here to tell you, I've through the wars on this project, and it was all down to that fabric.
It was a length from the stash that the daughter had chosen on a pho-and-fabric foray into Cabramatta last year. The girl loves soft, silky fabric, and this one filled the bill. There was no information available about fibre content at the store, but I am pretty sure that it is rayon. With a twill weave, which is why I'm guessing  the fabric stretched like crazy, exacerbated no doubt by the fact that some of the pattern pieces are either cut on the bias, or have bias edges.
I ran into problems immediately. I started out by sewing together the triangular top section of the yoke to the rhombus/parallelogram lower section of the yoke (that is the first time I've referred to a rhombus since Year 10 geometry, by the way). The pattern of the rhombus is marked with single notches on the top and bottom edge. Warning - if your fabric is almost-but-not-quite-identical on both sides, and therefore it is important to get the right right sides facing, as it were, the single notches are VERY confusing. It probably didn't help that in grading the pattern three sizes down for the hip, the shape was changed a lot. And the way the light plays on this fabric means it changes colour depending on what angle you look at it, so colour wasn't giving me any clues at all. Anyway, I sat and puzzled over the placement for a while, handling those pieces a lot as a consequence.  They stretched so alarmingly, there was nothing to do but recut them in the end. This time I marked the wrong sides very clearly in soap.
From there on, I handled these pattern pieces as if they were radioactive isotopes, or baby birds or something. So the process took a long time. Sewing this fabric was like trying to sew air. It was almost impossible to get a firm grip on it at all. It slipped and slid everywhere. Very frustrating. I found I could only sew in bursts of  20 minutes before my equanimity flew out the window and I was uttering rude words.
Fortunately, it seemed to behave itself under the presser foot. But I still pat myself on the back for sewing a difficult fabric, a first for me, and then for finishing the project, when there were times when I would have happily chucked it.
A note on length - other reviewers of this pattern have remarked on how long this pattern is drafted, and having to cut off considerable length. My daughter is 5'10", so I added the customary 5cm length to the skirt pieces, which I then had to cut off at the end of the process. So if you are anything shorter than 5'10", expect to shorten.
The result is not one of my best examples of precision sewing, to put it mildly, but it is ok. And my daughter really likes it, and that's the bottom line isn't it? 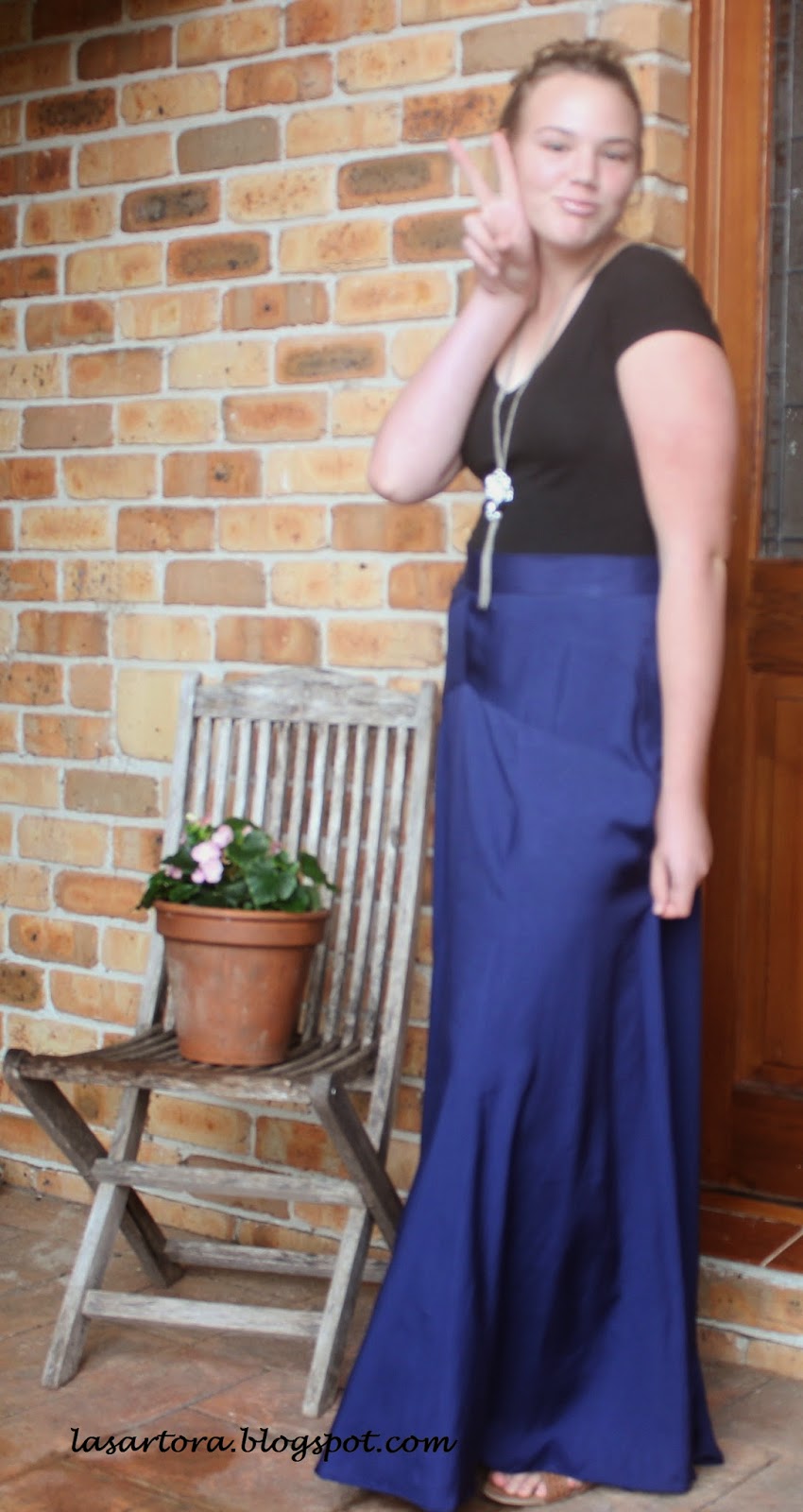 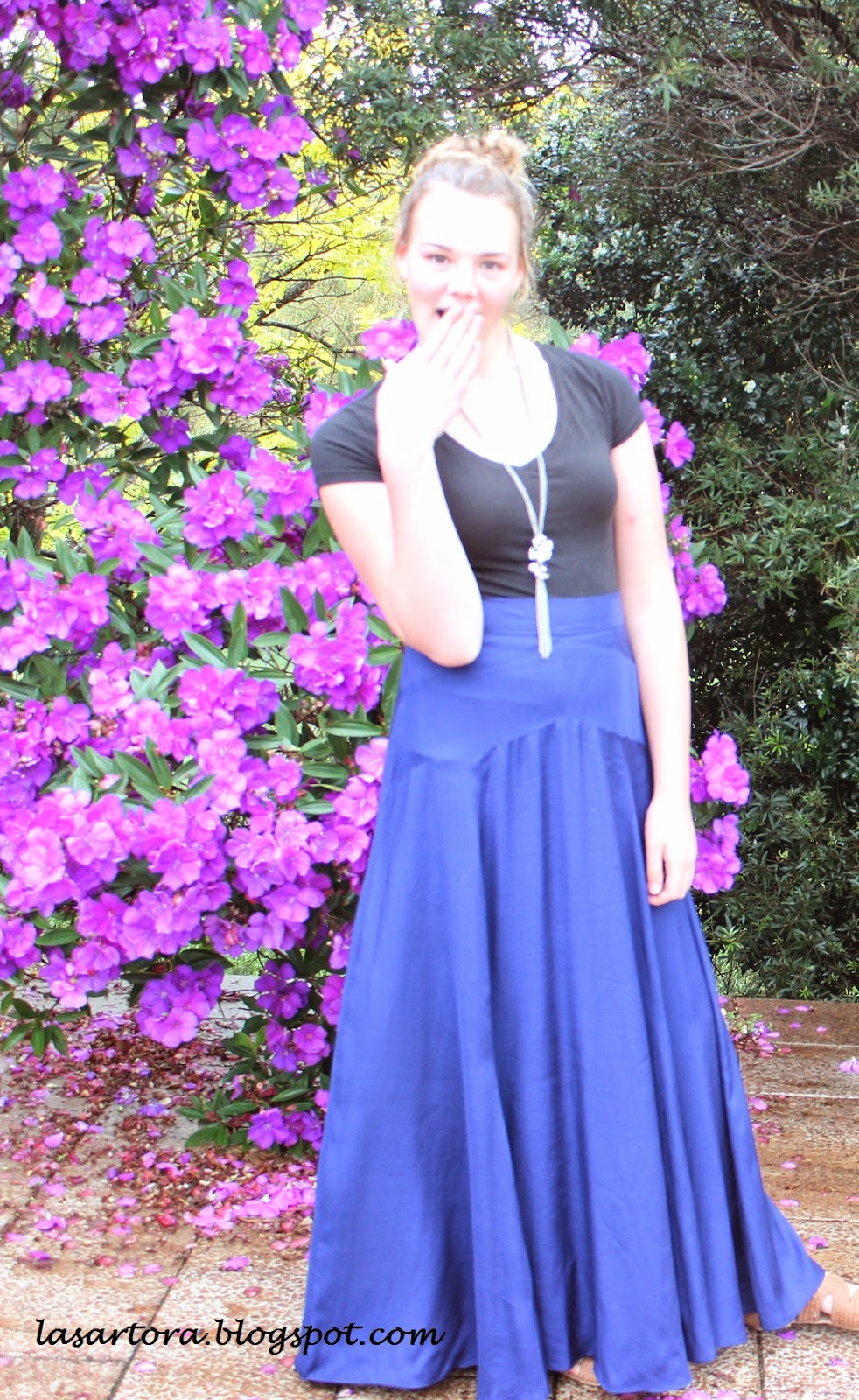 Emulating a typical pose from Burdastyle
Made by Me Sewaholic skirt