February 21, 2015
Want to know how to kickstart a flagging sewing mojo?  Simple. Enrol in a course of non-sewing study, that has a steady stream of assessments. Then watch how irresistible the pull of the sewing machine becomes. Eureka! Sewing mojo found! 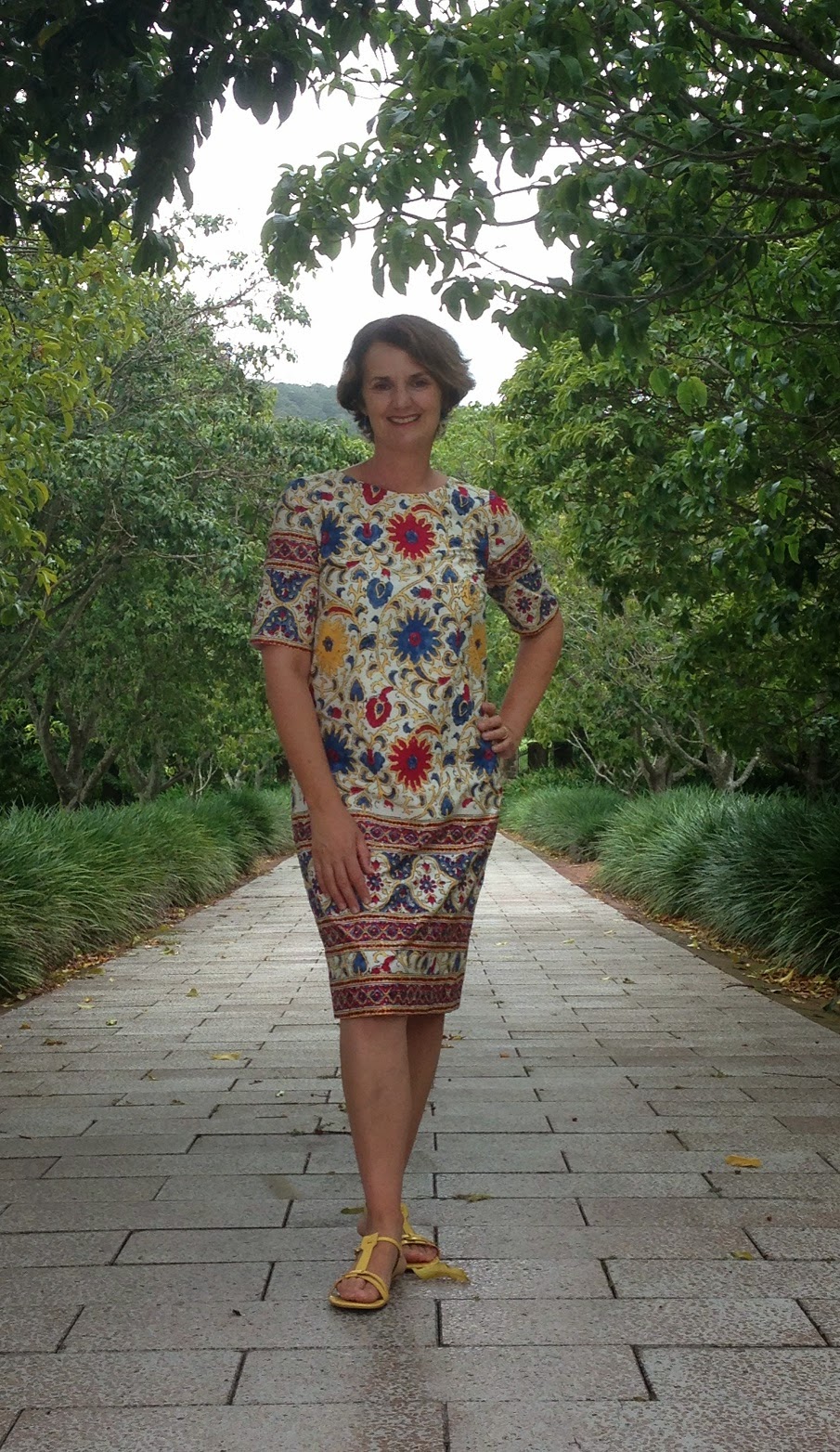 This Tuscany dress project has been on the to-do list for quite a while, and uses both pattern and fabric that have been in the stash for even longer. Naturally, given I had two assessments due on the same day last week, I had to make this dress IMMEDIATELY.
The Tuscan border print cotton was purchased from Gorgeous Fabrics in 2009. I love Italian painted pottery, and this print reminds me of that.
I made 02-2011-101 from Burdastyle in this fabric in pre-blog days. I only wore the dress once, enough time for me to realise I look ridiculous in a dirndl skirt. What was I thinking, seriously! I unpicked it, and scavenged the zip for this dress.
The Colette Patterns Laurel was purchased on its release in 2013. I muslined it at the time, but put aside for other projects that caught my attention.
There are three main pattern pieces, with bust darts in front, contour darts in back, invisible zip and bias binding at the neckline and sleeves: a simple project
I cut out a Size 8 bust, Size 10 waist and Size 12 hip according to my measurements. I then dropped the bust dart in front about 2cm, and made a full bust adjustment of about 1.5cm, my standard adjustment. I also added 15cm to bring it to my knee. The Laurel is short,and no one needs to see my knees.

I originally muslined this in a product called Trace and Toile which I got from Spotlight, which felt a bit like sew-in interfacing (for all I know it probably was sew-in interfacing) which had absolutely no drape. There was quite a bit of ease between bust and hip on the muslin, and the T and T made it stand out from my body in a very unattractive fashion. It was here I lost interest in the project originally.
But the border print Tuscan print had been looking for a home for ages, and the Laurel was the best option in the pattern stash. Despite my lukewarm reaction to the muslin, its simplicity was ideal for the border print.
Before cutting out the fashion fabric, I made one alteration to address a high, tight armhole. I slashed and spread all the pattern pieces by one centimetre. The neckline was also a tad high, so I dropped it at centre front by 1.5 centimetres, but probably could have done with more here.
Pattern placement took a bit of time.  I duplicated the front pattern so I ended up with a full pattern piece, and made another back piece so I could place the two back simultaneously. I’m pretty happy with what I have achieved, although I had to cut out one sleeve again, when I realised I really should have centred the large motif. I had plenty of fabric so that wasn’t a problem.
I underlined the front and back pieces with cotton batiste to deal with the slight transparency of the fabric. This is the first time I’ve underlined anything, and it was pretty straight forward. There are lots of ways to go about it, but I used the method outlined in Barbara Talbert Weiland’s  Sewing Answer Book (as an aside this little sewing book is one of the best sewing references. It is only small, but is comprehensive. It also fits into the sewing cabinet trays, so I don’t need to leave the sewing machine when I need to remind myself how to go about a technique mid-sewing session) . After cutting out both fabric and underlining, I glue basted the two pieces together at the vertical seams and the shoulder seam (didn’t bother with the neckline and armhole), using No More Pins glue. I love that stuff. Then I machine-basted the through the centre of the darts, and I was away.
With only three pattern pieces, this is a simple sew, but it doesn’t mean it wasn’t time consuming. I sewed the scavenged zip in first, then after sewing the shoulder seams, I spent quite a bit of time experimenting with how much to take in the side seams. It ended up being quite a bit.  I reckon I could have cut a straight size 8, because I ended up taking in about 2 inches from the waist, and 4 inches from the hip down. So there is quite a lot of ease there, up there with the best the Big 4 have to offer.
Then, unfortunately, taking the dress in so much made it a bit cumbersome to put on/take off the dress, as the scavenged zip wasn’t quite long enough. It would be a deal breaker if I didn’t fix this, so I had to unpick the zip and back seam and start again with a longer zip. I’m glad I did.
Not being much of a dress wearer until I started sewing for myself, this is the first shift dress I’ve had in my wardrobe since the shift dress we wore for sport in Year 7. True. I feel quite comfy in this dress, so I’m confident there will be more. 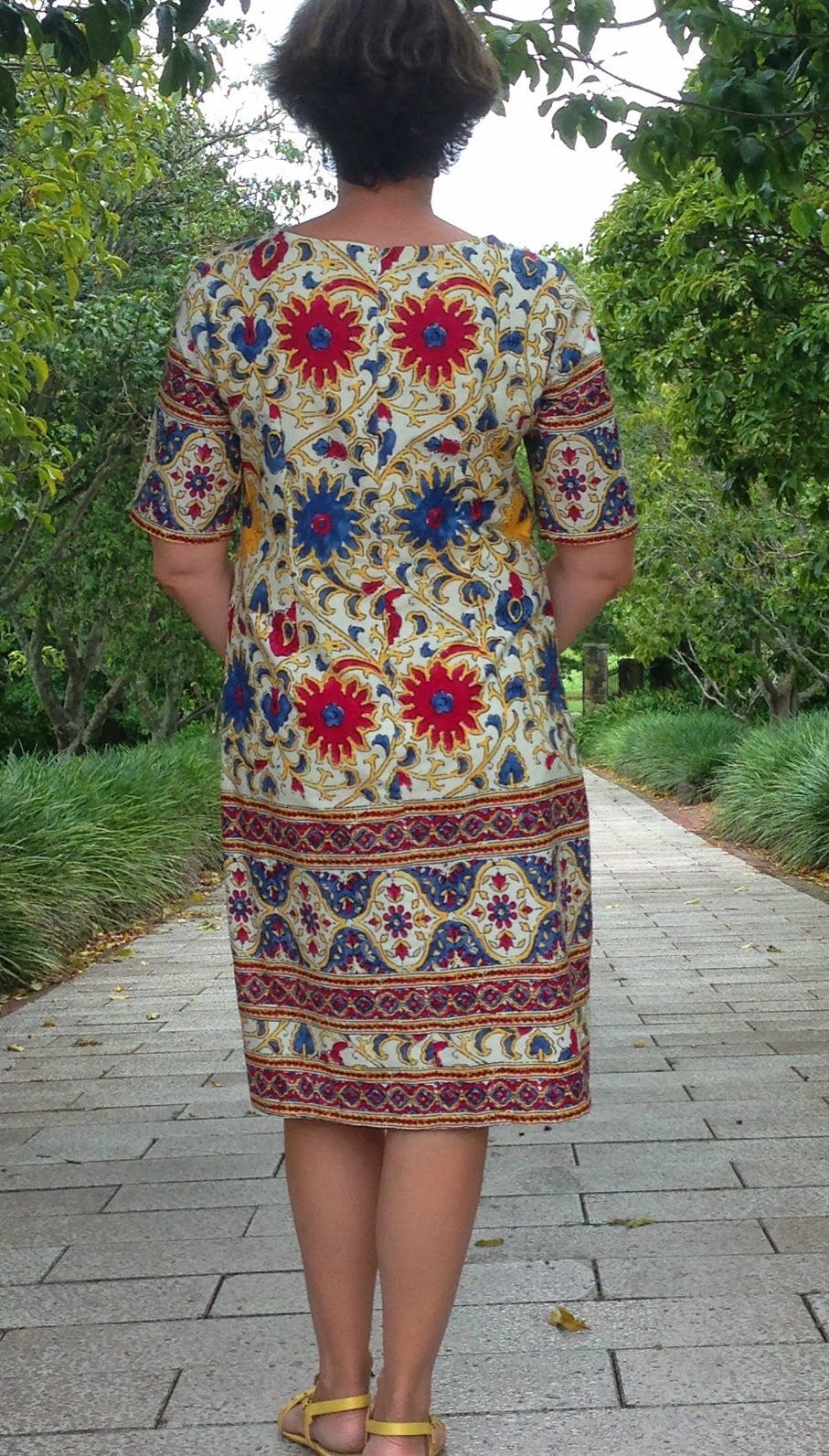 I still have a bit of sewing to do on this: the hook and eye above the zip. Sewing hooks and eyes always makes my own eyes roll back in my head. I think it’s because they feel so impossibly tiny in my impossibly large hands. I just feel clumsy when I sew them, and I always do a dodgy job, no matter how hard I try. Sigh.
What about you? Do you have a sewing task you love to hate?

Colette patterns cotton dresses Made by Me