December 13, 2015
Back in August a friend of mine sent a “save the date” email for her 50th birthday party in October. Anticipating a glam event, as my friend enjoys a bit of glam, I thought, “Excellent! Finally a reason to make that Laurel in lace that’s been hanging around the sewing queue for a while, because I’ve not had a reason to sew it”.
Unfortunately, when we received the official invitation, a week before the party, I found out it was to be an Australian themed costume party. Sigh.
So, here’s the story of the lace Laurel, the dress with no place to go (yet).

I made my first Laurel back in February. I was pretty happy with the fit, which gave me the headspace to deal with sewing with lace and polyester double georgette underlining for the first time.
I cut out the underlining first, marking the darts. I then sewed a narrow hem on the front and back pieces, attempting to use my narrow hem foot. The trouble with me and the narrow hem foot is that I only use it every so often, so every time I get it out, I have to re-teach myself how to use it. After a few test hems, I remember what to do, and have had good results with it. However, I’ve never used the narrow hem foot on super-fraying fabric like the double georgette and I found it really hard to get a good result. I soon ran out of patience (surprise!), and opted to make a machine narrow hem. That gave me more control, but the hem isn’t as pretty as a nice narrow-hem foot hem. However, sitting under the lace, this is not so obvious, fortunately.
After I did the hems, I used the underlining pieces as pattern pieces and cut out the lace, trying as much as I could to line up the scallops so they ran uninterrupted around the hem. Then I hand basted the underlining and lace pieces together all the way around each piece and through the darts. This took a LONG time.
As this was the first lace item I have ever sewn, I didn’t really know what to expect. I don’t know – I had visions of the lace getting caught on the presser foot, or disappearing down into bobbin-case land (or whatever it is called). It wasn’t as hard as I thought. The georgette proved more of a challenge, mainly because it frayed so abominably. I’m glad I chose a simple pattern like the Laurel for my first foray in georgette – anything harder would have frayed my nerves as well.
I sewed French seams for the shoulder and side seams, and bound the sleeve seams in bias strips of georgette.
I’m pretty happy with this dress. The only quibble is it is slightly longer than I hoped. I altered the pattern to take the lack of a hem into account. Maybe with the slightly stretchy nature of the lace it dropped a bit? Once you cut lace with a scallop edge, there is no going back.

This is the second fuchsia dress this year. I have never, ever worn this colour before, but my colouring seems to be changing as I get older. Colours like red, that I used to gravitate to, suddenly look and feel overwhelming. Indeed, I recently donated my Colette Peony dress in red wool crepe for exactly this reason – quite like the pattern, but the colour is just not me any more.  Meanwhile other colours, like this fuchsia suddenly seem to work.
Anyway, while this dress has nowhere to go at the moment, there are a few milestone events coming up in 2016 (a Significant Birthday for me, a Significant Wedding Anniversary for us, Oldest Child turning 18 and finishing school), so I am confident it won’t languish in the wardrobe.


And what did I wear to the Costume Party? Well, I went as Agnetha from Abba, in the costume she wore on Countdown circa 1976. Even though Abba were Swedish, they were massively popular to the point where they were Australian cultural icons. This outfit is one that Australians of a certain age will remember, I’m sure!! 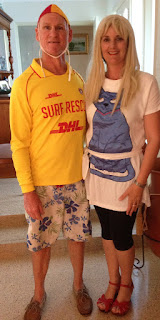 And for overseas readers, my husband is wearing the distinctive uniform of Australian surf lifesavers.

Colette patterns dresses life Made by Me