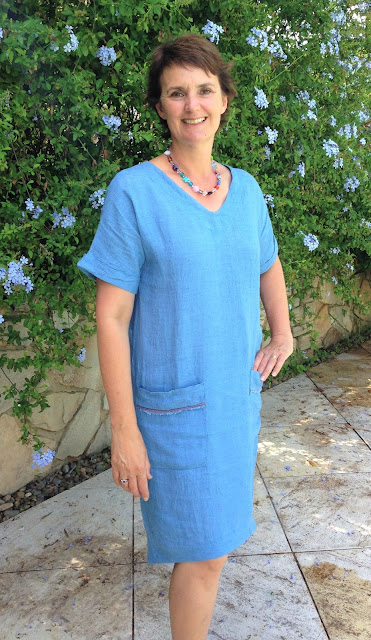 When I saw Style Arc’s Adeline pattern on its release last year, I pegged it immediately as the ideal candidate for a Christmas dress.  With a lack of waist definition, it is Christmas lunch friendly, and loose enough to withstand inevitable Christmas Day heat in comfort.
I chose some linen I had in the stash bought from Tessuti online about 2 years ago.
This was what Tessuti called Wainscot linen, and the colour was described on the website as “Indigo”. On the monitor it looked to be a mid-dark blue.   Well, indigo turned out to be more sky blue than I bargained for, so the pants I had planned got shelved. Fortunately, though, to me there is no such thing as bad linen, so I knew that if the fabric just marinated in the stash for a while, I would eventually find some use for it. This was just one of many surprises I’ve had with purchasing linen online.
I made Adeline pretty much as is out of the packet, except I added 3cm in length because frankly,  I don’t like showing my kneecaps to the world.  And I blatantly ripped off Lara’s idea, and trimmed the pockets with selvedge because the selvedge was prettily multi-coloured, so it seemed rude not to. 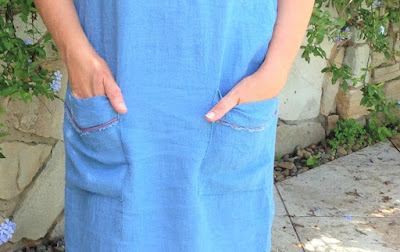 I had ideas of doing flat fell seams for the shoulder and centre back  seam, but was running out of time so did plain vanilla ones instead. I normally love a centre back seam to help me address my swayback, but in this case I just sewed it up as drafted, and am not sorry I did. 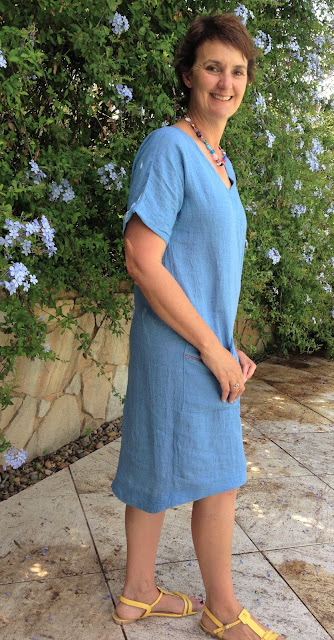 I like the pronounced high/low thing happening at the hemline. Although the dress has a cocoon shape, it’s not so much that it inhibits normal walking. If it did, it would be a “fail” in my book – who needs a dress that you can’t walk naturally in? 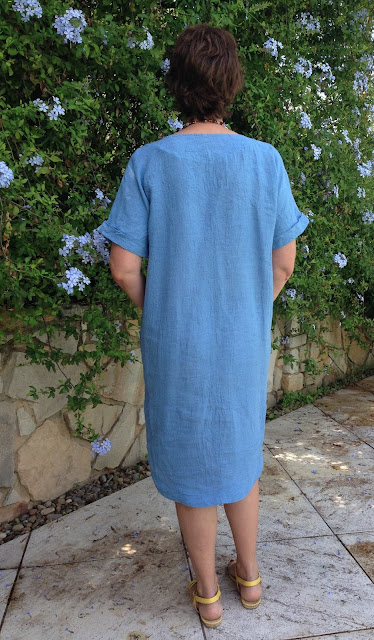 Anyway, I really like how this dressed turned out. It did it’s job on Christmas Day admirably, and garnered an admiring comment from one of my fashion conscious sisters-in-law. So, yes, a  win there.

dresses linen Made by Me Style Arc