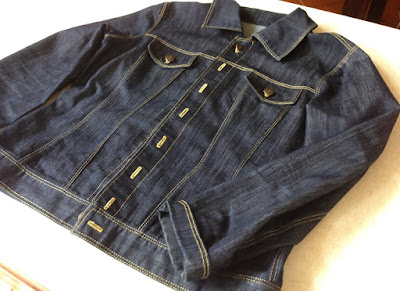 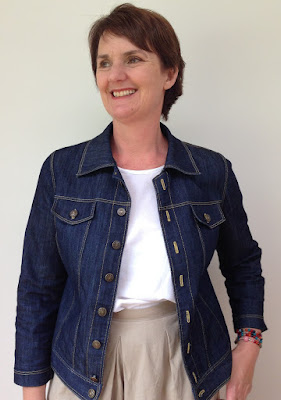 The main reason I didn’t get onto this project earlier was the nagging suspicion that being a somewhat fitted jacket,  it would need some sort of FBA for me, a person who has never regretted making an FBA . But looking at the shaped seamlines on the front of the jacket, I had no notion of how to make an FBA without mucking them up.
In the end, though, (and because my mother wanted her machine back – I’d borrowed hers to thread up for the topstitching for this jacket and the Stevie) I just decided to plough into it, no FBA. I did make a 2cm bicep adjustment to the sleeves though. I made no other adjustments.
After the Stevie, with its 19 pattern pieces, the Stacie is a straightforward sew. The chest pocket flaps are faux, there are no hip welt pockets, there are nowaistband tabs, and the sleeves are in one piece without cuffs, so this jacket sewed up far more quickly than the Stevie.
Like the Stevie, there is a fair amount of topstitching on the Stacie jacket. I enjoy topstitching so that’s a good thing! I did exactly the same topstitching on this jacket as I did on Stevie:  doubled up Gutermann thread on stitch length 4.
This jacket went together well, as ever with Style Arc. The instructions are a list of steps, and again, as ever with Style Arc, my sewing manual isn’t far away if I need to research some construction detail. 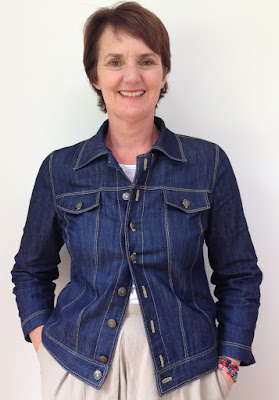 Having made the jacket, I have to say my suspicions were correct:  it would benefit from an FBA when I button it up, though it  doesn’t bother me when it’s unbuttoned. And I don’t see myself buttoning this jacket up too often or at all, so it really isn’t an issue in the end. 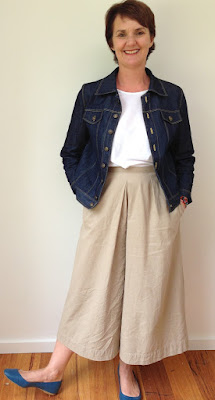 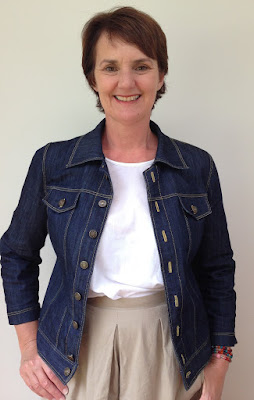 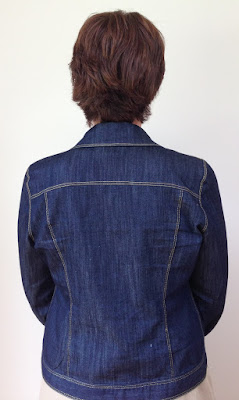 I really enjoy the shape and fit of this jacket. I have worn this frequently since I made in September and can see other versions of this jacket coming up – a linen version would be great . Next time, I might add a bit of length to the sleeve. The sleeve is designed to be folded up. Even so,  I think a little extra length here would be better on me.
So, yes, Miss Procrastination did strike here, but when I finally knuckled down to it, this project was worth the wait.

General 2017/2018 musings
Given that this blog has been in a sort of abeyance for the last six-seven months, it’s also an apt time to review where I’m at with sewing, blogging and life in general.
Going to life in general first, there have been a few changes in the lives of the people I live with lately, and that inevitably has an effect on me.
I’m no longer the mother of two high-schoolers, as my daughter finished school last year. Instead my kids have now both left school, and though they have opted to go to the local university and are living at home, the “hands on” mothering I used to do has dwindled to very little. That one day they would need very little attention from me, apart from offering sage advice on an as required basis, seemed unimaginable when they were toddlers, and I spent most of my time in hands on mothering. Life moves on, and the day when they will finally fly the nest is not far off.
The other major change is that my husband has retired. He always maintained he would retire in his 50s, and he has.
One of the most common reactions to news of his retirement is to ask if he worries if he’ll be bored. I’ve never had those worries. I nickname my husband Action Man, because ever since I met him in 1989, he has been one of those people who has pursued careers (he had two), but also maintained many interests outside work. And guess what? Now he has time to really pursue them. He is now the happiest he’s been in years. The last few years in Corporate Australia have been bruising, it was a relief when he finally decided to pull the plug, to be honest.
So with my children increasingly independent and my husband around to do stuff that has always been done by me, mainly because I was the one more available to do them, life offers possibilities for me suddenly.
In 2018, I’ve decided to finally pursue teacher training in Iyengar yoga. I think I’ve mentioned that I practice Iyengar yoga, and have done for about 15 years, a couple of times on the blog. Over the last year I’ve committed to a regular personal practice (90 minutes-2hours per day, six days a week), as preparation for teacher training which starts next week. Apart from practice, this will involve theory study, and four weeks a year at the school in Canberra, for trainee teacher intensives.
So how does all the above feed into what I will do with sewing and blogging?
It occurs to me that around now is the 10 year anniversary of my journey with sewing. Before that I sewed on an ad-hoc basis, mostly with underwhelming results. But a chance Google search one day brought sewing blogs into my orbit, and suddenly all the information and inspiration I needed to start sewing in earnest for myself was available to me. I never really looked back.
I consider myself to be an intermediate sewer, but one of the great things about sewing is that there is always more to learn. While my teacher studies will be my priority over the next three years, I’ll always have some sewing project on the go. It would feel weird not to.
As to what I will sew in 2018, like a lot of other bloggers out there, I am committing to cutting down on fabric and pattern purchases, and sewing what is in the stash. Seriously, I have some good stuff in the stash, I don’t feel guilty about the stash AT ALL, but wouldn’t it be better to wear some of that good stuff rather than have it stuck folded in a storage bin? We all know the answer to that.
I guess since I will be wearing activewear more than ever in the next few years, I should look at doing a bit of activewear sewing. However, I did try with the Sewaholic Pacific leggings, made in supplex, and I was less than impressed with them (they were never blogged), mainly because of the fabric choice. Too flimsy. I need something with a bit of beef to it, especially for leggings. And though I haven't looked really hard, sourcing activewear fabric seems to be a bit of a palaver. It's easier to just buy RTW .
Blogging is a slightly different matter. I enjoy reading blogs, and writing the blog is not a chore to me. However, photography is always the fly in the ointment. I’ve never liked having my photo taken, and five years of doing that for my blog has not changed that. This is not helped by the fact that my daughter-photographer is more and more unavailable to take photos, so coordinating times when she can take photos with time when I can take time to spruce myself up to take photos – that’s tricky.
Blogging has changed a lot since  I started reading them, but even so, I still prefer to read a blog post than to say, see something on Instagram. Scrolling through my Instagram feed is less engaging than reading through a blog post, no matter how short it is. Call me old school.
Not sure where I’m going with this – I guess the summary is I still want to blog, but there are obstacles with blogging that I’ll have to work around.

jacket life Made by Me Style Arc